Writing A Book, Bird by Bird

For several years, a small black-and-white photograph has been propped on the easel on my desk. Henry B. Fox is seated in front of his manual typewriter in the converted smokehouse that served as his office. Nearly six years ago, I decided to write a biography of Fox, the Circleville Philosopher. He published a humor column in country newspapers for a half-century and wrote three novels as well.

At long last, I am finished with this phase of the project. Work and life kept getting in the way, but the book — 85,000 words, including a chunk of Fox’s best work at the end — is complete, edited and ready to be published. 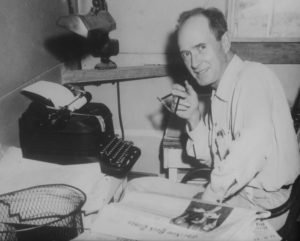 [1]I remember that feeling on a Saturday afternoon in early August. I wrote the last sentence of the final chapter, looked up at the screen, and sighed. I was actually finished writing this tome.

I finished the draft three months ago, then sent it off to folks I trust to read and suggest edits, including Fox’s daughter, who is a retired college English instructor; my daughter Meredith, a professional writer and editor; and my friend Frank Pool, semi-retired from teaching English.

Like any substantial project — whether it is writing a book that involves extensive research or building a dining room set for six, which I have also done — there is really only one approach that allows one to keep perspective and not become overwhelmed. It is the “How do you eat an elephant?” saw: one bite at a time.

Anne Lamott put it another way in my favorite book on writing. When she was a child, her brother had a report due on birds. It was assigned three months previously, but of course he put it off until the weekend before. He was overwhelmed, about to cry.

As Lamott writes, “He was at the kitchen table, surrounded by binder paper and pencils and unopened books on birds, immobilized by the hugeness of the task ahead. Then my father sat down beside him, put his arm around my brother’s shoulder and said, ‘Bird by bird, buddy. Just take it bird by bird.’”

Fox was a funny, fine writer, which made telling his story that much more enjoyable. He skewered politicians of all political persuasions, so readers could not tell whether he was a liberal or conservative. (You will have to read the book to find out.) I was able to interview his children, who live side-by-side on the family farm, along the banks of the picturesque San Gabriel River in Williamson County.

Alas, writing the biography of someone that few have heard of (he died in 1989) is not a formula for commercial literary success. The larger academic presses took a pass on my book proposal. It is possible a small academic press might bite, but it would take at least a couple of years to get into print, if not more. Even then, promoting and marketing the book would be almost completely up to me. I do not want to wait that long to get this into print. None of us involved, from the folks I interviewed to yours truly, are getting any younger.

So, as I did with my last collection of columns (The Loblolly Chronicles, available on this website under “Books”) I am going to publish this myself, with the able assistance of my brother, Scott, who designed and paginated that book and will do so again. Daughter Meredith will assist with promoting it on social media, and I will set up my own book signings and talks to historical groups. I have registered Loblolly Publishing as a DBA (doing business as) down at the courthouse for $14. With luck, hard copies of Yours Faithfully, J.A.: The Life and Writings of Henry B. Fox, the Circleville Philosopher, will be available by January or February at the latest. E-books, such as Kindle, also will be offered.

I am already casting about for my next long-form writing project, spending hours scrolling through old newspapers online through my membership to the Houston Public Library. Idle hands are the devil’s workshop, and I feel out of sorts if I am not working on something, between emails and calls for the newspaper brokerage gig that helps pay the bills. Books, for me, don’t pay the bills. It is just something I am compelled to do.