Adding a Greenhouse Before Winter Arrives

I recently bought a greenhouse kit on eBay for my Beautiful Mystery Companion, who loves nothing more than to play in the dirt — unless it is playing with a puppy. We have a bevy of decorative plants she tends to, while forbidding me to do anything more than admire them. I am happy to oblige. I can kill a plant just by staring at it too long. It’s a gift. 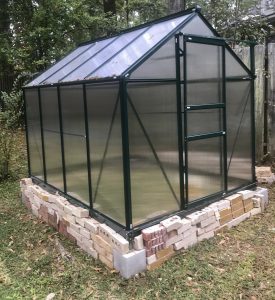 [1]For years, the plants in winter have taken up residence either in the house or the shop, which is a one-car attached garage filled with power tools rendered useless when the plants arrive. They don’t fare well in either location — not enough light. Last winter, I ended up lugging them inside and outside a half-dozen times, which is a pain. That spurred me to at last buy a greenhouse in plenty of time to assemble before the first freeze. The finished product would measure about 9 feet by 7 feet.

The kit arrived about a week later in two heavy boxes. The FedEx driver cast a dirty look at my front door as he walked back to his truck, no doubt unaware I was watching out the study window. I don’t envy his job these days. Lots of packages.

I dragged the two boxes to the shop, sliced them open in search of the assembly instruction manual. Hmm. Lots of metal parts, a 5-pound bag of screws and nuts. This is going to be a project, all right. I found the manual — all 32 pages of it. I looked at the parts list: 158 metal pieces, 18 plastic translucent panels, 430 screws and nuts of various sizes. I flipped through the pages, which contained detailed drawings. Each part was labeled: F-C01on up to F-43.

I studied the manual some more. There was no way in the world I was about to tackle this project. Winter would be over before I finished. It was time to call Raul.

Raul rebuilt our deck after the May 2019 storm, adding a gazebo in which I spend a lot of time, staying cool under the ceiling fan. He has completed a few other projects for us, always with precision. He takes great pride in his workmanship. He and his son, Henry, showed up the following Saturday.

The manual said assembly would take about three hours with two or three folks working on it. Either the manual lied, or the Chinese manufacturer has a different definition of what constitutes an “hour.” It required about 30 hours for them to build the greenhouse. They finished late one evening and carried it to where we had decided to put it. That’s when I realized the greenhouse had 12-inch legs that don’t show up in the online photographs. I suppose the idea is to bury the legs into the ground for stability. I elected instead to have Raul and Henry place the legs into half-size concrete blocks, after which I filled the block’s cavity with river pebbles.

But that left a 1-foot gap along the bottom, which would make it impossible to heat the greenhouse during freezing weather. I put out a plea on Facebook for 600 used bricks, which was my original calculation. My BMC was skeptical we needed that number, so I remeasured. (Measure twice. Cut once.) Sure enough, the closer number was 250. As it turns out, our next-door neighbor knew of a source, a salvage yard in Greggton behind Lakeview Cemetery, where my parents are entombed in the mausoleum on the third floor. He kindly met me at the cemetery parking lot and took me there, even offering to give the cash to the owner. He uses the yard quite often in his line of work.

I loaded Big Red, our 1965 Ford F-100 with 250 bricks of varying colors. The next day, I got to work laying the bricks without mortar. The result is, well, funky. But at some point we plan to move out in the country, and I want to take the greenhouse with us. Raul said he can load it on a trailer and not have to disassemble it.

A bit of work remains, installing some shelves, buying a heater and a hanging lamp. The temperature is inching downward, into the upper 40s at night. There is still time. And I have some leftover bricks if anyone needs them.