For the first time since I was a kid, I decided to keep a record of the books I read this year. I started a list in a notebook I carry with me, writing down the author and title each time I finished one. Then my daughter, Meredith, reminded me she had h 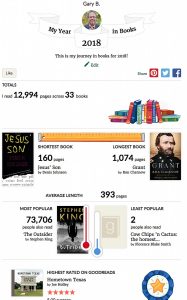 [1]elped me sign up for Goodreads, a “social cataloging” website now owned by Amazon. The compamy began in 2006 and soon developed a strong following, now with more than 25 million members. Goodreads allows one to find titles, buy them on Amazon (of course), make recommendations, participate in polls, blogs and other activities in which I take no part. It also makes recommendations based on previous books posted, similar to how Amazon creepily suggests buying choices based on what else I have clicked.

I ignore nearly all of Goodreads’ features, but I decided to use it to keep track of my book reading activity. The notebook still serves as an analog backup.

I have a few friends who also use Goodreads, and I take interest in what they’re reading since I might want to do the same. That’s the extent of my use of Goodreads. I only occasionally write brief reviews and have no interest in joining one of the 20,000-plus online book clubs or forums. But the other day, the app announced it had compiled my journey in books for 2018, so I took a look:

I posted thus far 33 books finished this year, a few less than I actually read. I will have to consult my notebook. Regardless, according to Goodreads, the 33 books totaled 12,994 pages. The shortest book I read was Jesus’ Son by Denis Johnson at 160 pages. Longest was Grant by Ron Chernow at 1,074 pages. That biography of the fellow on the $50 bill was well worth the time it took to read.

Most popular book I read was Stephen King’s The Outsider. Nearly 75,000 other Goodread users posted their reading of the king of hair-raising-on-the-back-of-the-neck fiction. On the flip side, only two other people read Cow Chips ‘N’ Cactus, an entertaining tale of a woman homesteading by herself in Wyoming. The highest-rated book on Goodreads that made my list is Hometown Texas by Joe Holley, who is a columnist for the Houston Chronicle and a longtime colleague. It’s a fine compilation of Holley’s Native Texan columns, with wonderful photographs by Peter Brown.

One of the features I like is being able to quickly peruse a screen showing the books I have read, and those I plan to read. It is far quicker than wandering through my home library, trying to do the same, since my shelf filing system is haphazard at best. Spending the past year working part-time in the library has spurred me to resolve to better organize my books, though that resolution likely will go the way of most.

So here’s a sampling of the more obscure books I read this year:

I am already compiling my list of books-to-read in 2019, both on Goodreads and in my trusty spiral notebook. As Groucho Mark said, “Outside of a dog, a book is man’s best friend. Inside of a dog, it’s too dark to read.”

That came on a bookmark I picked up at a bookstore while buying another book the other day. Happy reading, everyone.