When A Texas Judge Banned Reporting

The media is under serious attack these days, with cries of “fake news” flying whenever a story is printed with which someone prominent does not agree. It has been a pretty effective tactic since there actually is a lot of fake news out there. The local newspaper on Sunday publishes a wrap-up of the most prominent fake news stories that circulated in the prior week. At least so far, nobody is being threatened with fines and even jail for reporting the news. I think the present occupant of the Oval Office would bring back the Alien and Sedition Acts of 1798, th 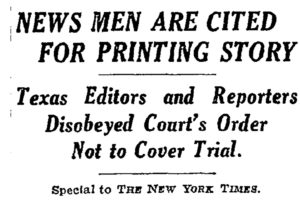 ough I doubt he actually knows what they are.

In July of that year, the New York Times reported that three editors and three reporters were cited for contempt of court for disobeying a judge’s order to not cover a murder trial. Judge M.S. Munson was presiding over the trial of Clyde Thompson, a prison farm inmate charged with two others with stabbing a fellow convict to death. Thompson was in prison at the time for shooting two youths “to see them kick.” He was known in newspaper accounts as “the meanest m

The judge ordered the editors and reporters for the Chronicle, the Post and the Press — all Houston newspapers — not to report on the trial in nearby Angleton, because it might hinder efforts to obtain impartial juries in the subsequent trials of the other two accused. Naturally, the journalists ignored the judge’s order, which clearly violated the First and Sixth amendments. Trials are open to protect the defendant, to prevent perjury — since the testimony can become public if the trial is covered (and not all are) — and to hold the jury, judge and prosecution accountable. All three newspapers reported on the first day

None of that apparently mattered to Judge Munson, who held the three reporters at the trial, and their editors, in contempt. He fined them $100 apiece, which in 1935 was more than twice the average weekly salary for newspaper reporters of $41.81. Editors averaged $89.98 a week. I plucked those obscure facts from the 1936 edition of the Bureau of Labor Statistics, one of 30 million or so public-domain books scanned by Google.

One of the attorneys for the men was quoted in the Times as arguing, “Any curtailment of the freedom of the press in this case might be an entering wedge, which might in time bring us back to the old star chamber proceedings.”

Judge Munson would not be swayed, however. The three newspapers appealed to the state Court of Criminal Appeals, which issued a unanimous ruling on Nov. 7, 1935. The court r

uled that newspapers had a right to report a public trial and threw out the contempt charges. The ruling pointed out that reading a newspaper account of a trial or the crime that preceded it does not disqualify a juror from sitting in a particular case. If that were true, the only people who could serve as jurors would be those who remain blissfully ignorant of current events.

Second, the court ruled that, under the Texas Bill of Rights, the judge had violated Section 8: Every person shall be at liberty to speak, write or publish his opinions on any subject, being

responsible for the abuse of that privilege; and no law shall ever be passed curtailing the liberty of speech or of the press.

As for the three murder defendants, Thompson was convicted and sentenced to 99 years in prison. The second defendant pleaded guilty and got 50 years.

Raymond Hall, the third defendant, was already serving two life terms. There is no record he was ever tried for the stabbing. Hall earlier gained notoriety for his songwriting abilities, penning 99 Years of Blues and Gambling Polka Dot Blues among others for Jimmie R

odgers, an old railroad buddy who some call “The Father of Country Music.”

A few years earlier, Hall, serving 99 years for murder already, swapped identities with a young fellow in prison for a one-year term for a liquor violation. The young fellow would reveal the swap after Hall was released and out of the country.

At least that was the plan. Apparently, Hall could not wait a year and escaped from the Huntsville prison farm, but was caught and killed a prison guard. The young fellow confessed to his part in the ruse, and Hall got a second life term. Four decades later, after being named to Who’s Who in American Poetry, Hall was paroled and pardoned, in 1976 after serving 55 years in prison. He died in 1983

All of this is real news, obtained from databases through the Houston Public Library online portal. The library allows any citizen of Texas to be a member. It is a blessing to folks like me, looking for stories to tell.