We’re In This Hostage Crisis Together

Every day I wake up, hummin’ a song
But I don’t need to run around, I just stay at home
And sing a little love song, my lover, myself
If there’s something that you wanna hear, you can sing it yourself

— “Everything is Free,” by Gillian Welch

Late every afternoon, just before decamping to the back-deck gazebo to read and listen to NPR, I pick up my Yamaha classical guitar and run through several scales, then play a half-dozen or so songs. The lyrics above are part of one of the songs I have learned to play. “Everything is Free” ostensibly is about how streaming music has made it difficult for musicians like Gillian Welch to make a living; at least that’s the interpretation I read online. Now that live music is nearly non-existent, their plight is even more perilous, just one of the many victims of the pandemic. 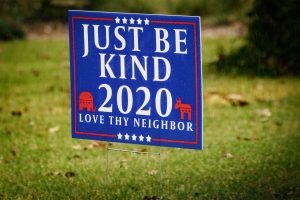 The stanza above is my favorite because I always wake up every morning with a song in my head, an earworm. And, I do very little running around these days. As the election approaches, the number of COVID-19 cases have again reached new highs. A vaccine is months away, despite what the (hopefully) short-timer in the Oval Office claims. Even the White House is apparently giving up on the notion that the virus is “just going to go away,” or that “we have turned the corner.” White House Chief of Staff Mark Meadows on Sunday: “We are not going to control the pandemic.” Well, that’s reassuring. Guess I’ll keep on staying home, singing songs, reading, researching and writing. As one pundit put it recently, 2020 feels like a long hostage crisis, with all of us kept captive. And I am one of the fortunate ones: healthy, able to work from home, safe.

Aunt Irene is my late mother’s younger sister. She lives in Connecticut and turned 87 in July. That is about the same time she began posting on Facebook an Election Day countdown, 105 days out. She is still posting her countdown nearly every day, recently adding an exhortation to vote for Biden/Harris. One might disagree with her political choices — of course, I’m in full agreement with Aunt Irene — but her commitment to civic responsibility at 87 is admirable. Plus, Aunt Irene is a devoted Red Sox fan. Similar political leanings and devotion to the pro teams of Beantown run in the family.

The death of singer/songwriter Jerry Jeff Walker marked yet another sad moment in a year filled with grief. I first saw Jerry Jeff in 1974 at a raucous outdoor concert in the Stephen F. Austin football stadium, along with Nitty Gritty Dirt Band, Steve Martin playing banjo, Rusty Weir and others. He came on late in the evening, a bit inebriated. I bought “Viva Terlingua,” his breakout album, not long after. The other day I learned how to play “Little Bird,” a song I first heard 45 years ago.

Picture of my face
On the window pane
Is it tears I see or is it rain?

A few days later, we lost Billy Joe Shaver, author of classics like “I’m Just an Old Junk of Coal” and “Old Five And Dimers Like Me.” Billy Joe was 81 and had a lot of mileage on his battered body. After being acquitted in 2007 of shooting a man in the face in a bar near his home in Waco, he wrote “Wacko from Waco” about the incident. I don’t think I’ll learn how to play that one.

With more than 230,000 deaths from COVID-19 at last count, and no end in sight, we have no choice but to live with grief, anxiety and a host of other emotions. Also anger, that it has come to this when it didn’t have to. The other day I saw a yard sign that lifted my spirits. The sign was not directed for or against a particular candidate. One of the neighbors had a Trump sign. Another had a Biden/Harris sign. This sign simply said: Just Be Kind. 2020. Love Thy Neighbor.

No matter how this election turns out, we can at least continue to be kind. We are all in this hostage crisis together, like it or not.