Travels Marked By Magnets And Stickers

I went to fetch a Topo Chico out of the refrigerator the other day. As the door opened, a refrigerator magnet fell to the floor after I accidentally nudged it while grabbing the handle. The magnet displays the silhouette of a moose on a background of red and black checks — like the flannel shirt hanging in my closet. The title: Vermont. I placed the magnet back on the fridge, where it keeps company with other souvenirs of our travels — from Big Bend to Boston, Taos to The Big Apple. Interspersed are magnets sent annually at Christmas by a lawyer friend. One of my favorites purports to quote Abraham Lincoln:  The trouble with quotes on the Internet is that you never know if they are genuine. 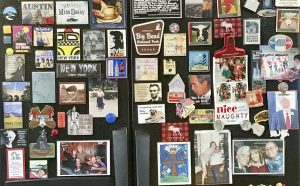 My Beautiful Mystery Companion and I love nothing more than hitting the road, preferably heading to the mountains — whether it’s in Vermont, North Carolina or New Mexico. This year we managed to visit all three places, each beautiful in their own way. The refrigerator magnets, along with window stickers for our vehicles, remind us of the wonderful and fulfilling times we have had hiking in God’s beauty. This comes in handy when it’s 100 degrees and 200% humidity, and I’m sweating profusely while making my way across a vast parking lot into the Big Box Store.

The stickers on our vehicles serve another purpose, which is being able to find our vehicles in those massive seas of asphalt. My BMC drives a gray Ford Escape hybrid I bought nearly 13 years ago, before we met. It has racked up 218,000 miles and still provides reliable transportation, though we are leery of taking it out of town. I drive a gray Toyota Rav 4 bought five years ago. It has roughly 120,000 miles on it, so it’s barely broken in. The Rav is our road-trip vehicle.

Thus, we both drive two of the most nondescript vehicles on the road today. There are tons of gray Ford Escapes out there, and there apparently are even more gray Rav 4s. More than once, I have attempted to enter an Escape or Rav only to realize that it’s not my vehicle.

Once I actually succeeded, because the owner didn’t lock it. As I sat in the seat, I wondered where that pine tree air freshener hanging from the mirror had come from. I detest those fake-scent gizmos and wondered if a family member was playing a practical joke. Then I realized I was sitting in someone else’s car, which could cause a shooting incident in East Texas, where just about everybody packs heat. I swiftly exited, looking around. Luckily, nobody was pulling a pistol out of her purse or his waistband.

That’s how the window sticker campaign began. For me, it started with a Red Sox sticker on the rear window, plus a “Press” sticker on the windshield, courtesy of the Texas Press Association. The latter actually saved me from getting a speeding ticket once. I was trying to get back to Mount Pleasant from Austin to cover a football game and was pulled over in a little town outside Tyler. The constable asked why I was speeding. I told him I needed to shoot a football game and pointed to the sticker as proof. He let me go with a warning, which is unprecedented. Usually a press sticker means two tickets are issued.

Soon, I was adding stickers from our various trips. Nothing political, because I would rather not get my vehicle keyed by someone who doesn’t share the same views I hold. At first, my BMC made fun of the stickers, but after temporarily losing the Escape in a parking lot, she followed suit. We now have somewhat of a sticker arms race going. She is winning, having abandoned her previous disdain for my predilection to slap stickers on the back window. I counted 17 on the rear window of the Escape. I only have 10, and have decided to stop there, at least on the rear window. I want to still be able to actually see what’s behind me.

That does leave two side windows in the cargo area, however. I don’t know where we are headed on our next adventure, but stickers and fridge magnets will likely mark the voyage.