This Machine Eats Trees, Spits Them Out

The tree mulcher arrived at our place on Saturday morning.

This beast was a Barko 930B with tires that are 5 feet tall, a 9-foot-wide set of blades in the front, an enclosed cab on top. It weighs more than 30,000 pounds and can turn a full-sized sweetgum tree into mulch in about a minute. A family out of Daingerfield runs a land-clearing company, which includes forestry mulching. We hired the owner’s operator to spend a dozen hours clearing as much of our 57 acres as possible of the trash trees – willow and sweetgum, mainly – that came to dominate the property in front, since it was not maintained for several years. In East Texas, what was once pasture can become overgrown quickly. The operator was instructed to keep the oaks, maples and other hardwoods that provide food for wildlife, such as the deer we see in the early morning and at dusk. I had spent Friday afternoon tying ribbon around the trees to be kept, joking to my Beautiful Mystery Companion that now I was literally a tree hugger. That was how I got the ribbon tied around the tree, by hugging those oaks and maples.

Mulching trees with this big machine is not inexpensive by any means. But if we still lived in town with that accursed swimming pool, I would have spent that much by now replacing a pool liner that was on its last legs. This is a lot more fun, watching the operator weave his way around the land, clearing it out to where it can once again become pasture while leaving stately live oaks and other hardwoods untouched.

The mulcher operator had a bevy of spectators as he turned sweetgums and willows into wood chips. My brother Gregg drove in from the Dallas area to watch, and several other folks stopped by as well. I should have sold tickets or at least put up a concession stand to assuage the costs of renting this monster.

I took “before” photos of what the land looked like before he began. As it cleared, the concrete pillars of pump-jack stands — probably from the 1930s and ’40s — popped out, previously hidden in the underbrush. Roads built from one pump to another became apparent. A fellow who came out later told me that oil derricks once stood out there. The wells are all filled in with one exception. A few hundred feet behind my shop, an oil horse continues to pump. A crew came out a few months back and put it back to work, installing a new electrical meter to power that old jack. We share our land with a gas well, and the property is crisscrossed with pipelines. It is nigh near impossible to buy land in East Texas that did not at some point have oil and gas operations on it.

Part of my job as a reference librarian at LeTourneau University is working with the R.G. LeTourneau Museum & Archives, especially in the summer. It is fascinating work. “Mr. R.G.” was an inveterate inventor, and his company built a number of tree crushers, including the monster G175. A small town in British Columbia has one from the mid-1960s on display as its main tourist attraction, with a sign in front: World’s Largest Tree Crusher. During the Vietnam War, the Army leased 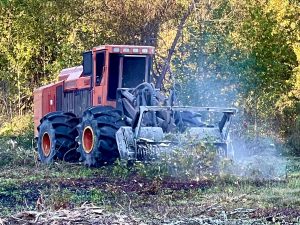 a couple to clear the forest and flush out the Viet Cong. That didn’t work so well since the G175 weighed 175 tons and kept getting stuck. 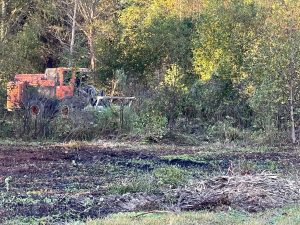 The tree mulcher out on our back-40 plus nearly got stuck a few times, despite “only” weighing 15 tons. About one-third of our land is in a flood plain with Glade and Wicher creeks crossing it. The bottomland gets boggy, helped by some underground springs. The operator had to back away several times, leaving giant tire ruts that I’ll have to repair with the tractor, a box blade and a disc harrow. Just another to-do item on the never-ending list.

The tree mulch operator returned early Sunday morning to put in the final five hours. He cleared all around the perimeter of our property, a nice 20-foot swath that allows us to keep the fence lines clean. My BMC and I were able to walk around our entire property for the first time. It was a lovely day for a walk, a crisp fall morning.

When we first met with the mulching company’s owner, he asked what our vision was for the land. I mumbled something about cleaning out the trash trees, getting it to where we could fix and maintain the fences, making it a haven for wildlife (except feral hogs). In fact, we’re working with a state wildlife biologist to come up with a formal wildlife management plan.

“You’re going for that state park look,” he said. Yes! That is exactly our long-term goal.

Maybe then we really could charge admission.