The View From The Library Window

Outside the LeTourneau University library windows, at the front entrance, there is a canopy of oak trees. They have provided me hours of enjoyment during this vibrant fall foliage season. After the time change, by mid-afternoon, the sun had sunk low enough to filter through the leaves, heightening the intensity of the colors. Burnt orange is my favorite leaf color, of course. But I also enjoy the shades of red and yellow visible through the windows. While working my shifts at the front counter, I can simply swivel around and savor those autumn colors. 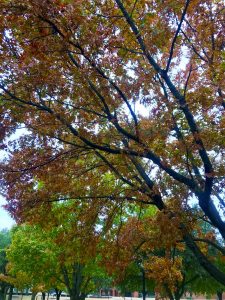 I teach my photography class in the library’s learning lab, which has the same bank of windows, starting at about 7 feet from the floor and spanning nearly to the top of the 15-foot ceiling. As I lectured and critiqued photographs shown on two wall-mounted monitors, I could watch the leaves turn color and then turn loose. Sometimes the images on the screen were similar to those outside that window – landscape photos of autumn leaves.

The view outside my study windows at home has been inspiring as well. Our Japanese maple, whose tip barely tops the edge of the roof, turned a brilliant crimson after that unusually early cold snap in early November. It is just now losing its leaves. The circle driveway is barely visible under the carpet. I peer in the sky, calculating when Goyo, our yard guy, can stop cleaning until spring. There are a few holdout trees that will necessitate his return at least a few more times.

I have had my eye on the swimming pool since we had it covered. The storm last May sent a neighbor’s pine tree into the still-covered pool, destroying the cover. Replacing it would cost nearly $2,000, so I opted for a much less expensive version that is held down by water-filled tubes. It is basically a giant blue tarp, whereas the old cover was held taut by hooks and springs. The weight of rainwater and wet leaves has pushed the cover down about 18 inches. I am still trying to figure out exactly how I’m going to get all those wet leaves off the tarp. For now, I’m leaving it be, since a large tree nearby is one of the leaf laggards.

Goyo works by himself and can get more done in less time than anyone I have ever seen doing that type of work. Our first autumn here, seven years ago, I raked and bagged the leaves. The nerd in me kept count of how many 40-gallon bags I filled – 142 by January, when the leaves were finally bare. The next year I called Goyo. It’s the best $35 a week I could spend. 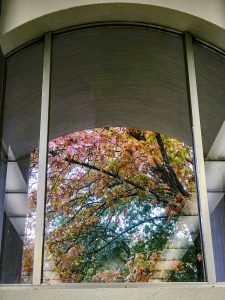 Last Tuesday, Goyo came while I was at work, which often happens. When I got home about 10:15 p.m., a familiar carpet of leaves covered the driveway and the small patch of ryegrass that grows in front of the azaleas. One reason Goyo is so reasonable is that I haul off the bags of leaves on the weekends, so he doesn’t have to deal with it. In the corner of the driveway, illuminated by my headlights, were about a dozen large bags. As many leaves had fallen after Goyo came as he had bagged earlier that day.

I worked in the library two days before Thanksgiving, my last shift to work until next week. Most students had left campus already, so the place was nearly empty. It had turned warm again, but now a cold front was slowly wending its way through East Texas. With it came rain and wind. As I watched, the trees outside the library rained down leaves. Leaves flew through the front doors and into the foyer whenever the wind kicked up as someone entered. I liked the way they looked, splayed out on the entrance rug.

The most brilliant East Texas fall foliage season in recent memory is nearly over. The grayness of winter lies ahead. Another year is nearly in the books.