The First Photograph And Russell Lee

For my introduction to photography class, this week I prepared a lecture on the history of photography. Cramming nearly 200 years of photography into 75 minutes was a daunting task. I started with the earliest image known to exist — a “heliograph” created by French inventor Joseph Niépce in 1826. It took an eight-hour exposure to create the street scene using an asphalt-like emulsion coated on a pewter plate. The image, encased in a box and behind glass inside a dimly lit room, is on permanent display at the Harry Ransom Center at The University of Texas at Austin. The HRC boasts one of the largest photography collections in the world. I spent many happy hours there as a graduate student in photojournalism, providing free labor to catalog images from a defunct newspaper’s photo morgue. 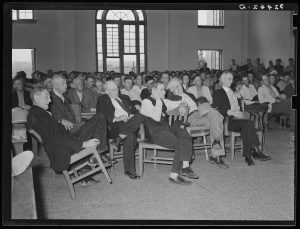 I have long been fascinated with the Farm Security Administration photographers who worked during the Great Depression from 1935-1944 to document rural America, which was especially hard hit by the depression, drought and the Dust Bowl. Roy E. Stryker guided this effort. Stryker grew up on a farm and went on to study economics at Columbia after serving in the infantry during World War I. He used the power of photography to illustrate the dire economic conditions faced by farmers and ended up as part of President Roosevelt’s Brain Trust.

As head of the FSA’s Historical Section, Stryker hired a group of photographers to document the agency’s attempt to help farmers and the poverty they faced. The FSA launched the careers of some of the country’s most-renowned photographers, including Dorothea Lange, Walker Evans, Gordon Parks and Russell Lee. Together, the photographers produced 175,000 black-and-white film negatives that are now part of the Library of Congress. Anyone with access to the Web can download an image, since they belong to America.

In the summer of 1980, I met with J.B. Colson, who spearheaded the founding of UT’s photojournalism program, to show my portfolio in order to get accepted into the graduate program. I had gone broke paying out-of-state tuition at the University of Missouri, moved to Austin, licked my wounds and was ready to regroup. An older man was in Colson’s office. It was Russell Lee, who had retired from teaching in UT’s art department after a long and notable career as a photographer. He murmured a few kind words after examining my work. Colson remarked the prints were too dark. (They were.) I ended up working a couple of semesters as a teaching assistant for Colson, a rewarding experience.

A few years later, having completed all my coursework, I took a job as managing editor of the San Augustine Rambler and became its publisher a few months later. Eventually, I bought the paper and stayed in that little town for five years. One day, I was rummaging through the closet in the back of the office. In a corner, along with some old advertising clip books, was a large photograph that I later measured: 18” by 24”. It showed what was clearly a San Augustine courtroom scene, a crowd of white men perched on chairs clearly listening to an unseen speaker. Several of the men in the photo resembled people I knew in town, though the clothes worn by those in the picture clearly were from the 1930s or 1940s. Plus, there were no women or people of color in the photo, which was another hint.

I took the photo over to longtime Sheriff N.L. Tindall, who by then had been in office nearly 30 years. He immediately recognized several of the men. “That’s C.L. Boyette’s daddy!” he exclaimed, punching a stubby finger at the fellow at far left. “And that’s Aubrey Matthews’s father,” pointing to another man who had a hand to his ear, as if straining to hear. Some of the men in the courthouse scene were the fathers of men I knew, who were now middle-aged, like the men in the photo. I had the courtroom photo framed and hung it in the office. It has traveled with me through many job-related moves. It now hangs above the fireplace in my study.

I don’t remember how I discovered who the photographer of the courtroom picture was, only that I did a few years after finding the print. Perhaps it was on one of my many trips to the University of Texas to research and write my long-delayed master’s thesis, which was on The Red-Lander, a San Augustine newspaper published during the Republic of Texas years. But I finally confirmed the photographer’s identity.

It was Russell Lee, the FSA photographer I met briefly years earlier when first enrolling at UT. My copy was clearly made from another print, because it’s a bit muddy in its tonal range. I downloaded a copy that accompanies this piece. It’s titled, “Mass meeting called to discuss ways and means for raising county funds in order to continue WPA roadwork. San Augustine Texas.” Lee took the photo in 1939, one of several hundred he made in the county.

The University of Texas Press in 2007 published a fine retrospective of Lee’s work. The introduction was ably written by J.B. Colson, my photography professor at UT and a close friend of Lee’s. Along with that print hanging above the fireplace, it is a treasured possession.