The blackbirds arrive twice daily here at the farm the past few weeks, swooping down by the hundreds, if not thousands, to dine at the two bird feeders and on the ground — especially since the cold snap hit. They show up not long after sunrise and just before sunset. The blackbirds are skittish creatures, quick to take flight and difficult to photograph.

The other morning, before winter returned, the morning temperature was about 70 degrees. A wet, thick fog covered everything. The tree line down the hill from our house was barely visible. Pancho the Donkey, standing in the back pasture, was a shadowy silhouette. Still, the blackbirds came as I sat in a chair on the back porch, camera in my lap. I fired away, the birds oblivious to my presence. One of the photos accompanies this piece.

The second image, of the blackbirds roosting in a tree, is greatly enlarged. Seconds after I took several shots, they flew away. I was trying to figure out what kind of blackbirds were visiting us. Of course, I turned to the internet. The Texas Breeding Bird Atlas, produced by Texas A&M, proved helpful, as did a site called WildBirdScoop.

There are at least five species of blackbirds found in Texas. They belong to a family called Icteridae, which also includes the popularly despised grackle — often found in grocery-store parking lots or swiping morsels off the plates of outside diners. Other family members include orioles, cowbirds, and meadowlarks. However, crows, which hang around our place cawing loudly, are not actually blackbirds. Crows are from a different family of birds, called Corvidae. Crows are smart creatures with pure black feathers. My Beautiful Mystery Companion watched the other day as a half-dozen crows chased off a red-tailed hawk that was hanging around, forcing him to retreat back inside the woods.

Blackbirds, which are considerably smaller than crows, are actually quite colorful when they stay still enough for one to notice. I caught a few flashes of scarlet the other day, a sure sign that some Red-Winged Blackbirds ha 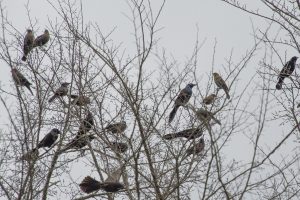 d come to visit. Both the Brewer’s Blackbird — purple-blue around the head and blue-green along the body, and the Rusty Blackbird — cinnamon colored — appear to be hanging around, though I can’t be certain. Both migrate from the north — snowbirds! They certainly enjoy hanging out in the wetlands that comprise a chunk of our land. And we enjoy watching them, especially at feeding time.

My BMC called me over the other day to where she was seated at the breakfast table. She pointed to a tree in the muddy pasture. A large bird was perched there. We thought it was the barred owl, making a rare daytime appearance. I slipped outside with my camera and began firing away as I made my way down the hill. I wanted to get a photo of it in flight, since its wingspan is impressive, I’m told. (I have never actually seen this owl, though I have heard the fellow hooting.) But the alleged barred owl flew into the woods as it sensed my presence. I didn’t get a decent shot of it in flight.

When I got back and popped the SD card into the Mac, called up the image of the owl on the tree branch and enlarged it as much as possible, we realized it wasn’t the barred owl. Rather it was a red-shouldered hawk — a raptor that also enjoys tall trees and wetlands. 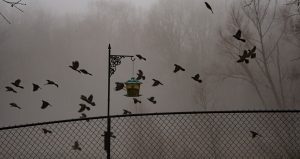 Once the blackbirds had left, the little birds came back to the feeders. I call them chickadees because I have no idea what they are, and that’s close enough for me. The A&M site says they’re likely Carolina Chickadees. I like the sound of that. Carolina Chickadees, it is. Whatever these little birds actually are, they don’t stand a chance of getting food when the blackbirds are about. I diligently keep the feeders filled so they get their share. It’s my job.