Despite giving away more than two dozen bank boxes of books to daughter Mere and the Estes Library at LeTourneau University, where I began working in person again this week, the collection I kept filled all the shelves in the new home, as well as the bookcases we brought here. As I said previously, building a barrister bookcase remains high on the woodworking to-do list. Buying books is a habit I do not intend to break.

Putting up books is always a pleasure, this ritual of renewing acquaintances with old friends. I took my time, trying to better organize them, keeping multiple books by authors together, separating fiction from non-fiction, biographies and histories. My OCD does not extend to alphabetizing my books or using the Library of Congress classification system we use at the library to keep books in their proper places. As I swivel in my desk chair, I spy books devoured years ago and more than a few that I’m not sure I ever read. If I did, I don’t remember doing so. I have put a couple of those forgotten tomes in the to-read pile.

More than 13 years ago, I wrote a similar column about moving books, when I came to Longview from Lufkin to publish the News-Journal. That remains my favorite column. It led a few days later to meeting the woman who would become my Beautiful Mystery Companion and to whom I have been blessed to be married to for just over a decade. She contacted me after reading that book column, thinking we might be friends based on the pieces she had read. She suggested we meet for coffee. We have been together since. Indeed, I am blessed.

I just finished reading Saved by a Song: The Art and Healing Power by Mary Gauthier, an acclaimed songwriter. We traveled to downtown Dallas several weeks ago to hear her perform at a benefit at Café Momentum, our favorite Dallas restaurant. (Google it sometime. It’s a great cause.) 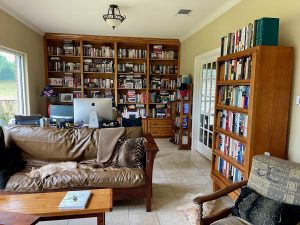 [1] Gauthier, whose songs come from a place of deep reflection, was selling the book after her stellar concert, ably accompanied by Jaimee Harris. I was first in line to buy a copy and finished it in two sittings a few days ago.

Rarely have I read a memoir that moved me like Gauthier’s did. She has battled alcoholism and drug abuse (clean now for 30 years), serial relationship issues that eventually compelled her to enter an in-patient facility to treat those demons, and, as an adopted child, to seek her birth mother – only to be rejected by her. Gauthier has come through all this and turned it into art through her songs, such as Mercy Now and The Foundling. In Saved by a Song, she shares those experiences in what she calls a “discussion of the art and healing power of songs and songwriting.

On an especially brutal August afternoon, freshly showered after hours bushhogging on the tractor, I plopped down in the Morris chair I built out of black walnut around 20 years ago. I cracked open a new book to read, one that had just arrived: Billy Summers, by Stephen King. I gave away my King collection to Mere, who has been a fan since King personally sent her a box of signed books after she had written him a fan letter as a teenager. My opinion of the renowned horror writer rose stratospherically after he took the trouble of performing this act of kindness. But I was never going to read The Stand or similarly thick volumes again. So, I kept 11/22/63, his alternate history of the Kennedy assassination, for a possible revisit and gave her the rest.

The plot of Billy Summers intrigued me: a hit man on one final assignment, living a double life by posing as a writer while waiting weeks for his intended target to arrive for trial at the courthouse across the street. There are no monsters save for the human kind in Billy Summer, unusual for the king of horror.

I sat in the chair by one of the picture windows, reading by natural light, grateful for air-conditioning and a respite from the heat. And for a new book in my hands on a dog-day afternoon.