Swaddling the Fear of Thunder

For the past week or so, thunderstorms have rolled into East Texas about 3 p.m., lasting at most an hour. After, the air is so heavy you can almost taste it, but at least it’s not 100 degrees. The heat will soon return, so no complaints from this quarter about these brief, soggy respites.

Sometimes it rains, sometimes not, but thunder invariably rumbles. The family mutts, Sam and Rosie, are usually sound asleep on one couch or another, their heads resting comfortably on pillows. How dogs understand that pillows provide a comfortable resting place fascinates me. These two have the run of the lower floor, sleeping wherever they wish, which usually means on a couch, head propped on a pillow. We once bought them dog beds, which they promptly shredded as if to let us know they preferred couches.

According to the American Pet Products Association, about half of dog owners let their dogs sleep with them at night. Nope, not gonna do that. The dogs stay downstairs at night, and since Fed Ex doesn’t deliver at night, nights are usually bark-free.

At the first peal of thunder, they jump down, run to the window and start barking. These dogs are not big barkers, thank goodness. Delivery trucks and thunder provoke barking fits from these two, though an armed burglar could walk in 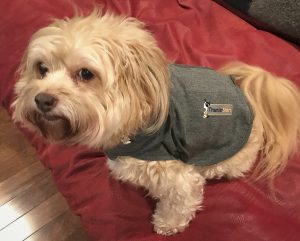 the door and at worst would be licked into submission. But let the Fed-Ex driver fly through our cul-de-sac, and the dogs throw a barking fit.

Thunder provokes the same reaction, followed by two medium-sized dogs cowering beneath my feet. Rosie especially can’t stand thunder. She shakes and whines pitifully between barks. I am convinced that Sam’s reaction is predicated on what his smarter sister is doing. Since Rosie is barking and whining, then he needs to follow suit. Sam is definitely a follower. Meanwhile, Tater and Tot, our two cats, ignore both the thunder and the barking mutts. They also find soft places to sleep, often on the window seat cushions.

All four of these critters are rescue animals. Suffice it to say they won the lottery when adopted by this family of softies. In return, they provide great affection and better entertainment than cable television. Cable is cheaper in the long run compared to vet bills, but not nearly as fulfilling.

About a year ago, I invested in a Thunder Shirt for Rosie. (That’s just one brand of several on the market.) It’s a vest that wraps around her body and neck, in effect swaddling her using Velcro strips. I was skeptical this $40 purchase would work. The pet store clerk assured me I could bring it back for a refund if it didn’t. It took me about 15 minutes the first time to figure out how to put it on her. Rosie began to lose patience and kept trying to get away so she could bark at the thunder. I finally succeeded in getting it on her correctly. Rosie immediately quit barking and trembling. She settled down on the couch, keeping a watchful eye on the window.

Since then, at the first si 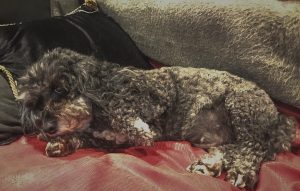 gn of thunder out comes the vest. Now Rosie leaps up on the couch and ducks her head down so I can put the Thunder Shirt on her. She stays calm throughout the storm, and then joyfully runs around rubbing her head into the rug once the storm is over and the Thunder Shirt removed. I decided to research further.

Dr. Temple Grandin is a renowned animal science professor and spokesperson for autism. Claire Danes portrayed her in the eponymous movie in 2010. Grandin had self-treated herself when paralyzed by anxiety by swaddling herself in what she called a “squeeze machine.” It’s a version of a cattle chute, and Grandin later adapted the method to handle cattle, lessening their anxiety by eliminating outside distractions. Grandin was one of four authors of an article in the Journal of Veterinary Behavior in 2014 on the effects of the Thunder Shirt on dogs. A total of 90 pooches were used in an experiment, with some dogs wearing it while others served as a control group.

Their conclusion was the Thunder Shirt indeed works as advertised in lowering heart rates and anxiety, but further study was needed (I think most scientific studies include that caveat.) Their study was not conducted at the behest of the company, according to the disclaimer.

Meanwhile, since Rosie has quit barking at thunder, Sam has decided to resume his rightful spot propped on a pillow. The cats yawn, stretch and go back to sleep as the rain ensues. All is well in the animal kingdom.