I went for a walk the morning after the Great East Texas Blizzard of 2021. The temperature hovered a couple of degrees above freezing, and the sun began to peek through the clouds. Snow started dropping off tree branches in our heavily wooded neighborhood, clumps of it bouncing off my hooded head. Birds were flitting about, no doubt looking for food now hidden beneath the 3-4 inches of snow covering the ground. I silently invited them to our house, where feeders abound to provide sustenance.

Our neighborhood is rarely this quiet. As I walked, squirrels scampered in the branches above, softly chattering. No leaf blowers could be heard — the soundtrack to our neighborhood most days. Landscape crews likely got the day off, unless they were out mutilating crape myrtles — a January ritual that should end. An occasional vehicle passed during my three-mile trek. A couple of neighbor kids were in their front yard with their dad, rolling the wet snow into sizable boulders. The snow was perfect for such creations. 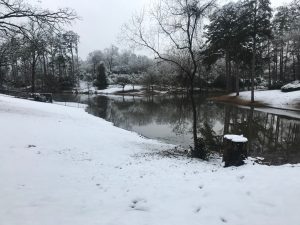 There is a private lake in our neighborhood. If it has a name, I don’t know it. With its banks and the trees around it covered in snow, it reminded me of a scene from my native New Hampshire, where I lived until being transplanted Behind The Pine Curtain on the cusp of turning 13. My maternal grandparents lived in the country outside Hopkinton, N.H. There was a an old, also unnamed, mill pond across the road that was home to beavers who would dam one end of it. (The pond is now part of the John Brockway Nature Preserve.) We loved to explore the narrow trail around the pond and admire the beavers’ handiwork. The pond froze over in the winter, and my cousins and I enjoyed venturing out on its surface.

Until I fell in one day. The ice clearly wasn’t as thick as we surmised. A couple of cousins swiftly pulled me out and hurried me inside my grandparents’ house to warm up. I was about 9, as I recall. I still remember thinking, albeit briefly, that I could die in that freezing water.

I have been back to the nature preserve on vacation several times as an adult. Maybe I will get to return this summer, a vaccine in my arm, and the pandemic finally under control. Maybe…

During the midst of the snowfall, our granddog Mollie, came to visit and pose for photos. It was her first experience with snow. This tiny Maltese weighs in at 8 pounds but leaps like a German shepherd trying to scale a chain-link fence to tear out one’s throat. She didn’t really know what to make of this cold, wet stuff, but gamely pranced about until we had finished taking photos.

On the other hand, Sam the Dog, a 12-year-old poodle/cocker spaniel mix (we think — he’s a rescue dog) treated the snow as a giant pupuccino from Starbucks when led outside. He stopped every few steps to gobble up a mouthful of snow, clumps of it hanging from his beard. Finally, Rosie, who is likely part-Maltese (also a rescue dog) treated the snow as an imposition and scurried inside as soon as she completed her business.

Meanwhile, our two cats, Tater and Tot, viewed the snow as an outrage and swiftly darted back inside to sleep on their favorite chairs.

The Great East Texas Blizzard of 2021 coated the town in a peaceful blanket of white. After what had been a truly horrible and unsettling week filled with an attempted coup and continued bad news about the pandemic, Sunday’s snowfall provided a welcome diversion from the horrors on television.

By late afternoon Monday, much of the snow had melted, as it typically does here. One snowstorm a year is enough for me.