Sorry, It’s Not The End of a Decade

As 2019 draws to a close, we are barraged with “Best of the Decade” lists. One of the New Yorker’s film critics published his favorite movies of the past 10 years. I have not seen any of them and have only heard of a couple. Variety did the same with music albums, presented by three critics. Of the 30 listed, I had actually heard of about half the artists and own the work of one on the list — Kacey Musgraves, an East Texas native.

And on it goes. WalletHub ranked the least-caring cities of the decade, with Birmingham, Alabama taking the top (or low) spot on the list, edging out San Bernardino, California and Laredo, Texas in its care for the community, the vulnerable and its workforce. Food and Wine ranked the nation’s most-beloved grocery stores of the past decade, with Wegmans topping the chart. One would have to travel to the East Coast to shop at a Wegmans, though expansion is slowly bringing the chain into the South. H-E-B-owned Central Market, prominent in larger Texas cities, came in second place. There were rankings for best and worst airports, most effective hair dryers and the top fashionistas of the decade.

There is just one problem with all these lists and punditry about the close of the decade. It is not the end of the decade!  That does not come until Dec. 31, 2020. Bear with me here. I have done my research, clicking on Google and poring over such authoritative sources as the Farmer’s Almanac.

Most of the world has used the Gregorian calendar since its establishment in 1582. It established leap years as coming every four years for the most part — 2020 is a leap year — to accurately account for the actual time it takes for the earth to orbit a single time around the sun. This was a successor to a system created by a monk known as the Venerable Bede in 731. He was expanding a calendar created by another monk two centuries earlier. Dionysius 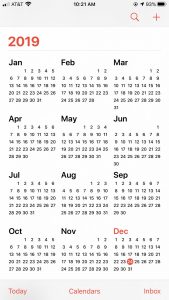 [1]Exiguus in 525 calculated  —  inaccurately, as it turns out — when Christ was born but ignored the thousands of years preceding his birth. Then, Venerable Bede created Before Christ, or B.C. to count those years, which far outnumber the centuries after Christ’s birth. Anno Domini (Latin for “in the year of Our Lord) started with 1 AD, not zero. The year before 1 AD is 1 BC.

Thus, each decade starts with “1.” This came up at the close of the millennium, 20 years ago during the Y2K scare. Folks were freaking out about the rollover from 1999 to 2000, because some surmised computers would cease to function, since their calendars wouldn’t roll over correctly. The computers would think it was 1900, not 2000. We would all revert to driving horse and buggies and have to do without television.

OK, not really, but I spent New Year’s Eve of 1999 sitting in the office of The Daily Sentinel in Nacogdoches, waiting for the clock to strike midnight to ensure technological disaster did not ensue. Not that I was equipped to do anything about it, but somebody had to stay on board the possibly sinking ship. Of course, nothing happened. I left the office and went over a friend’s house. He worked for the phone company and also pulled sentry duty. We toasted the New Year about 12:30 a.m. And technically, 2000 was the last year of the 20th century, not the first year of the 21st. Further confusing matters, the next 10 years will be known collectively as the 2020s, or maybe just the ’20s.

A few years ago, I published a biography of H.B. (Henry) Fox, the Circleville Philosopher. Fox married into a newspaper family. In 1950, he was publishing the Taylor Times in Central Texas, while his brother-in-law was publisher of the Frankston Citizen in East Texas.

Fox proclaimed the end of 1949 as the end of the first half of the 20th century. His brother-in-law, the colorfully named Quanah Price, took issue in print. Editors, especially if they were kin, enjoyed sniping at each other in the newspaper columns. That’s how Henry met his wife, who worked for her brother. They began making fun of each other, eventually married, and continued their good-natured repartee for many decades. (You’ll have to buy the book to learn more. Go here to do so: https://garyborders.com/pages/books/yours-faithfully-j-a/[2] )

I don’t think Henry Fox ever budged on the issue, citing then-President Harry Truman, who held similar views on the calendar. Quanah noted in response that, “this isn’t the first time a New Deal politician made a mathematical error. It’s commonly known that those fellows just naturally are weak when it comes to such things as figures.”