Sam and I Play Possum

I’ve been playing possum… with a possum.

We feed our two cats in the shop, which is an attached one-car garage. Our den used to be the other half of the garage, so it is easy to let them out there and open the door to the outside so once fed they can do their business. If we feed them inside, Rosie the Smart Dog will figure out a way to steal their food. Rosie lives to eat. She eagerly sits as we eat, waiting for crumbs to hit the floor. The cat food will disappear before Tater and Tot have had a chance to swallow a few kibbles, if Rosie has her way.

Cats and dogs eat differently. Dogs, at least our two, prance in joyous anticipation as meal time approaches, at 7 a.m. and 5 p.m. They perform pirouettes, dance upright on their hind legs, make silly yipping noises. Once fed, they devour their dry dog food in a matter of seconds. Then it is back to their usual routine, which is finding a soft place to sleep, like one of the pillows on our assortment of sofas. 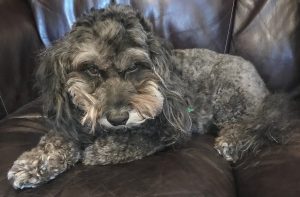 [1]Cats, however, eat slowly and deliberately. They prefer to nibble a while, prowl a bit, then return for a second course. Often they will leave food in the bowl for the next meal. When the cats are full, they stop eating. This is foreign behavior to our dogs, who believe any repast left uneaten will be taken away, so it must be consumed even if they are full as ticks on a bloodhound.

One morning a few months ago, my Beautiful Mystery Companion informed me that a critter had taken up residence in the shop. I had forgotten to close the outside door. The evidence was readily apparent. This critter was not housebroken. I cleaned up the mess, opened the garage door, and began hunting for the culprit. It was nowhere to be found, so I concluded it had already left the premises. I shut all the doors, figuring problem solved.

When I let the cats out later, it became clear the critter was still inside, judging from the physical evidence and numerous items knocked off the storage shelves. I fetched a flashlight and began searching again. Cowering in a corner was a baby possum, which began hissing at me. A hissing baby possum is fairly hilarious, like being threatened by a large, ugly cat. Speaking of cats, ours were of no assistance. They ignored the possum and generously shared their food. They knew there was more food where that came from.

Again, I opened all the doors. A lightning bolt of inspiration compelled me to fetch the leaf blower. I cranked it up and began sweeping it through the shop like a machine gun. The possum fled. I declared victory.

Several days later, my BMC reported the possum had returned. I had again neglected to close the outside door. This time, he left pretty quickly after I caught him out in the open instead of hiding in a corner. I closed the doors, cleaned up the mess (this was getting old) and headed for the morning walk with Sam the Not-As-Smart-Dog. As we were about to leave our yard, I spied the baby possum in the azaleas. So did Sam. I let him loose with the exhortation, “Get that possum, Sam!” He tried his level best, though I knew there was no way he would: 1) Actually catch it and 2) Know what to do if he did.

When we returned from our walk, the possum was meandering around the backyard. I let Sam loose once again, and the chase was on with the same results. Sam received high praise for his noble effort.

I have not seen the possum since. He’s probably, well, playing possum.