Reading, and thinking, about America

Let us be lovers, we’ll marry our fortunes together
I’ve got some real estate here in my bag
So we bought a pack of cigarettes and Mrs. Wagner’s pies
And we walked off to look for America

I have been reading tomes about America lately. Recently I finished These Truths, Jill Lepore’s brilliant and sweeping history of this country released this fall. Lepore accomplishes what most would consider a nearly impossible task — telling this country’s history in a single, if hefty, volume.

Her account begins in 1492 and ends with the election of Donald Trump. As she points out, the American idea relies on the three concepts that Thomas Jefferson called “these truths,” which are political equality, our natural rights endowed by our creator, and the right of the people to self-governance.

Of course, in the beginning of our Republic, not all were created equal. A more accurate phrase would have been, “All white men are created equal.” Women did not receive the right to vote until the 20th century. Slaves, under the Constitution written and ratified in 1787, were counted as three-fifths of a person for the purpose of the required decennial census. Under law, in the states that allowed slavery, they were considered property. Native Americans were systematically moved out and wiped out, through weapons and disease. 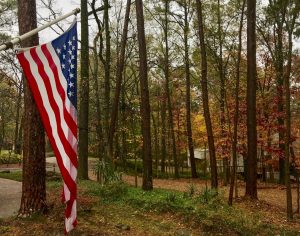 Much of what Lepore describes in this history of our country is unpleasant, even despicable, from the genocide committed against Native Americans to the internment of Japanese-American citizens during World War II, to the lynching of blacks after the Civil War and continuing until the middle of the last century. But there are stories of great courage and perseverance. Frederick Douglass remains one of my heroes. A new biography of this freed slave and famed orator is on the to-read list.

Earlier this year, I plunged into American Creation by Joseph Ellis, which is comprised of a series of chapters describing the early years of the Republic, an episodic approach that greatly appeals to me.

During the last quarter of the 18th century, the men whose names remain familiar to us came together to make decisions that would shape the future of this young country — George Washington, James Madison, Thomas Jefferson and John Adams. Also participating were Alexander Hamilton, newly popular because of a recent Broadway musical, and Benjamin Franklin, best known to children for his kite-flying abilities.

Three major issues faced the founders after the British surrendered at Yorktown, the first time a colony had won its independence in the modern era. It was a victory against exceedingly long odds, what Washington called “a standing miracle.” Now this loose confederation of states had to figure out how to govern. It also had to decide how to deal with slavery and with Native Americans.

As Ellis recounts, the founders succeeded in establishing a centralized government with three branches that has largely served us well in the two-plus centuries since. But the Treaty of Paris in 1783 ceded sovereignty to this new nation, essentially ignoring the Native Americans who had lived there for centuries, as if they were the interlopers, and not the European settlers. Westward migration would prove unstoppable, despite efforts of men such as Henry Knox, Washington’s Secretary of War, to adopt a more humane Indian policy. As Ellis writes, “Indian removal was the inevitable consequence of unbridled democracy in action.”

As far as slavery, Benjamin Franklin initiated the first open and recorded debate over the topic in U.S. history. He failed to prevail, of course. As Ellis writes, as a result, “the prospects for a sectional battle over the preservation of slavery appeared inevitable.”

As I devoured these books and others this year — God Save Texas, by Lawrence Wright; Mr. Adams’s Last Crusade: The Extraordinary Post-presidential Life of John Quincy Adams, by Joseph Wheelan; Grant, by Ron Chernow, Fear, by Bob Woodward and others — I recall the opening episode of Newsroom, starring Jeff Daniels. As he sits on a panel in a college auditorium, a former colleague and lover slipped into the back row holding a sign: America is Not The Greatest Country.

That almost feels like blasphemy. We are raised to believe this is the greatest country on Earth. Perhaps that is not the point, even as advocating “America First” and other nationalistic slogans are in vogue these days. Perhaps we should instead work toward answering this question: “How can we become a better country than we are today?”

One way is by attempting to understand our past. We ignore it at our peril. As Lepore writes, “The past is an inheritance, a gift and a burden. It can’t be shirked. There’s nothing for it but to get to know it.”