The sale of chess sets has boomed this Christmas season, thanks to a Netflix mini-series called The Queen’s Gambit, which we watched recently. Goliath Games, a toy company that sells several types of chess sets, told NPR that sales are up more than 1,000 percent compared to last year. Other companies have similar stories. Chess has become the sourdough bread starter in the latter months of 2020, after the series debuted in late October. The Queen’s Gambit features an orphaned girl of 9 who is taught chess by the janitor hiding in the basement, who hides down there replaying famous chess games by himself instead of, well, actually working. Beth Harmon is a chess prodigy who quickly rises through the ranks after being adopted to become one of the best in the world, while battling some serious addiction issues.

I don’t want to spoil the series for anyone who plans to watch it, other than to give it two thumbs-up — even if you know nothing about chess. For lifelong chess players like me, The Queen’s Gambit provides a realistic insight into the minds of the truly gifted players, who can see a dozen or more moves down the road. I never had that gift even when I was young, though I became a decent player. 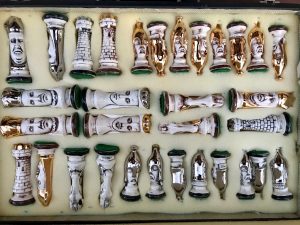 My maternal grandfather, Joseph A. Bourque, taught me the game when I was around 7. He routinely beat me while providing advice on strategies. Grampa Bourque was a true autodidact. Born in the Quebec province of Canada, he emigrated to New Hampshire, where he worked at Sears in Concord for many years before opening his own Shell service station near the state capitol. He was a gifted carpenter and woodworker, building my grandparents’ modest home in rural Hopkinton. A covered bridge he constructed crossed the brook (what Yankees call creeks) in the backyard and provided storage for lawn equipment. One year, he built a wooden toboggan long enough to hold a passel of grandchildren. A restored Model A sat in the garage. And he played a mean violin. Grampa Bourque died of a heart attack at the age of 67 while shoveling snow off the roof one winter. I was 16 and living in Longview by then.

My love for chess has waxed and waned over the decades. Finding folks to play became harder in adulthood. In the 1980s I bought a Radio Shack chess computer that allowed me to play against a nonhuman. That’s something I hadn’t done since when as a kid we went to the Boston Museum of Science and played against a massive computer that played chess. I’m quite sure I lost. The Radio Shack chess machine had varying levels of difficulties. I couldn’t beat the machine at its top level but at the levels below I had no problem.

That machine broke or got lost in a move. My next foray was online chess in the early 2000s. For several months I would play nearly every night against opponents across the world, which I found rather exotic. One received a ranking based on wins and losses and depending on the opponent’s rank. I slowly rose in rankings to close to the top 10 percent, but my enthusiasm waned after an opponent cussed me out virtually after being checkmated. Not very gentlemanly behavior for the Game of Kings.

Finally, at least until the pandemic forced us to distance, I acquired a live human opponent — my nephew Connor, now 15. He began playing about four years ago and competed successfully in UIL tournaments. The first time we played, I warned him, as my grandfather had warned me, that I was not going to let him win. He would have to beat me fair and square. Connor accepted the ground rules but looked a bit pained when I checkmated him in short order.

Fast forward to Thanksgiving 2018 where he and I set up to play after a typical calorie-laden holiday meal. Dulled by the turkey’s tryptophan and a couple of glasses of pinot noir, I made a dumb move and lost my queen. Connor pounced and scored his first victory. I heartily congratulated him, of course, and then beat him the next game. Since then, he has won a few times, but now it has been well over a year since we have been able to get together to play. I look forward to our next match and have encouraged him to watch The Queen’s Gambit.

The title refers, by the way, to a classic opening move if one is playing white. I plan to use it on Connor next time we play.