It’s only a paper moon
Sailing over a cardboard sea

There is a sense of unreality in this new world of masks, curbside pickup, staying home and safe, learning the tools needed to teach online, FaceTiming friends and family, doing CrossFit workouts in our den instead of the gym. And so on. Further notes from the pandemic: 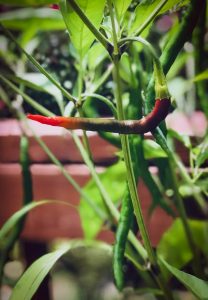 [1]Our vegetable crop still flourishes, save for the sole tomato plant in a container. It yielded at most 20 tomatoes. That came to about a buck a tomato, indicating my future does not lie in vegetable farming. But the serrano, cayenne and various strains of jalapeño peppers are thriving on the sun-bleached deck. So are the crape myrtles planted last year behind the deck, after the May storm took out several large trees — and much of the deck. The crape myrtles are more than 15-feet tall, with pink and magenta blooms reaching for the sky.

It’s been interesting to observe the changes to the backyard since those trees fell on our house and were removed. Grass grows in spots where it never took hold in years before, as do noxious vines that entangle the azaleas and have to be pulled out by hand weekly. Hey, I have the time…

I can hear birdsong from inside the house, which has never happened before. Even with the central air blasting away, and Cowboy Junkies playing softly on Spotify, the trill of the cardinals comes drifting inside. Each day, when I take a break from working in front of the iMac, I read a few pages of “What It’s Like To Be A Bird,” by David Allen Sibley — a sweet anniversary gift from my BMC. I learned robins often raise a second brood of birds about a week after the first brood fledge. Only about a fourth of those fledglings make it to November. As Sibley puts it: Wild birds face two competing risks every day — starvation and predation. They must eat without being eaten, and they have to find enough food every day to last through the long night.

Once again, I have taken up playing guitar, something I renewed doing 10 years ago. Then months would pass while the guitar gathered dust in the corner. I began playing as a teenager, so it isn’t like starting from scratch. This time, I intend to keep after it in my quest to reach mediocrity. I changed the strings and started anew. The calluses are back on my fingertips as I play 20-25 minutes daily, running through old favorites called up through an iPad app — songs by John Prine, Leonard Cohen, Simon & Garfunkel and Guy Clark, to name a few. The chords are dumbed down to my (low) level of skill. This is therapy, certainly less expensive than a virtual visit to a counselor. Plus, it cracks me up the way the dogs leave for the next room the second I pick up the guitar to play. At least they don’t start howling, at least not yet.

This month marks 38 years of writing a weekly column. Except for nine months when in the late 1980s I taught at Kilgore College, I haven’t missed a week or rerun any pieces. Occasionally I steal from previous columns and retread a paragraph. I figure it’s OK to steal from oneself. For three years, I wrote twice weekly, so by my calculations I have written roughly 2,100 pieces. There are more than a few that I wish had never seen daylight. Still, it is a habit I intend to continue long as I’m able.

When I began writing a column for the San Augustine Rambler in 1982, middle-daughter Meredith was a year old. Today, she turns 39. (It’s my late dad’s birthday as well.) Happy Birthday, Mere! Love, Dad.