There’s a new four-legged member of the family. Pancho the Donkey is on long-term loan from Jim, the youngest brother of my Beautiful Mystery Companion. Pancho is now safely ensconced in the pasture behind our house — with its fences repaired, a shed in which to get out of the rain (a rare event, lately), a fresh round bale of hay, and a plastic barrel cut in half to hold a bucket of sweet feed. 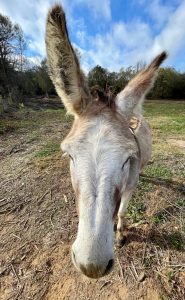 My BMC stopped at the Big Box Store before Pancho arrived and bought two large boxes of granola bars. That is one of his favorite treats. Pancho eats out of her hand like a very large dog — roughly 400 pounds, according to Jim. My BMC has been going up to Jim’s place to visit with Pancho for years. Now she just has to walk down the driveway to the pasture behind our house.

Pancho is 22 years old, blind in one eye but otherwise in excellent health. He is light brown with a white face and the traditional cross of dark-brown fur down his spine and his back. The tips of his ears are black. He is basically a pet who brays excitedly if someone approaches — especially if he hears the telltale crackle of a granola bar wrapper or spies a bucket with sweet feed inside. Pancho likes to be scratched behind his ears or under his jaw. As Jim said, if he could sit in your lap, he would.

We were worried how Pancho would react to this change of scenery, since he has been in the same familiar surroundings for a couple of decades. Previously, he shared a space with another donkey with which he had issues. They fought like bad-tempered brothers. There was concern one of them was going to get seriously injured by a flying kick. So Jim decided a lengthy cooling-off period for Pancho at our place was in order.

Our worries were unfounded. Pancho clomped out of the horse trailer into his new digs and promptly rolled around on his back in the dirt a few times, like an overgrown dog. Then he stood up and walked around, taking in his new surroundings, eyeing the fresh round bale of hay. We poured some sweet feed in the barrel, and he loped over to chow down.

Early each morning, if it’s not raining, my BMC brews her coffee and heads down to greet Pancho. She unfurls her folding chair, the kind you take to watch a baseball game from outside the fence, or an outdoor concert, plops down and communes with Pancho. As soon as he spies her, Pancho starts braying and heads to the gate to meet her. They have quickly settled into this routine just after sunrise each morning.

We are exploring the possibility of acquiring a girlfriend for Pancho, both for company and procreation. It would be great fun to have a baby donkey on the premises. However, we shall proceed cautiously. Any jenny we bring in must be as gentle with humans as Pancho — and get along with him as well. I am researching donkey matchmaking services at present.

From my study window, which looks out onto our recently cleared land and the woods beyond, I can see Pancho. Generally, if my BMC and he aren’t having their serious morning conversation, he stands near the gate, possibly taking a quick nap while on his feet. Donkeys sleep lightly while standing, then lie on their sides to catch some serious shuteye. Every once in a while, as I watch while working at the computer, Pancho ambles over for a bit of hay, or nibbles on the grass, or rolls on his back in the dirt, kicking up the dust.

Domestic donkeys can easily live into their 30s. Pancho likely has a solid decade or more ahead of him. I should buy stock in the granola bar company. Their sales are definitely rising.