No Joy in Killing a Hog, But It’s Necessary

Until Sunday night, I had gone my entire life — 66 years and one month — without killing any type of creature with a firearm. I half-heartedly took a few shots during a quail hunt about 20 years ago, joined by three other fellows all firing away at a lone quail darting about the Deep East Texas sky. The quail escaped unharmed. We decided to start shooting skeet instead, with largely similar results. Most the clay pigeons broke upon hitting the ground, not as a result of our shotgun blasts.

Back in the 1980s, I took my little brother Gregg deer hunting on some acreage we were leasing in San Augustine. We split up, and as I sat there trying to stay warm, a buck stepped into view, maybe 100 yards away. I sighted him in with the scope on the borrowed deer rifle, then lowered it. If I shot that deer, then Gregg and I would have to field dress him and haul it first home and then to a meat processor. I was not terribly fond of venison at the time, though I have come to enjoy it when properly prepared. Gregg came away empty-handed but continues to hunt regularly.

I have no moral issues with hunting at all. It’s just not my thing. I only kill God’s creatures when necessary, such as snakes that have taken up residence in my garage, usually dispatched with a machete if the serpent refuses to leave. That happened once with a rat snake that repeatedly declined my invitation to leave the premises, opting to curl up in the corner and glare at me.

That brings me to the hogs. As I wrote[1] a few weeks ago, wild hogs have invaded our front pasture, creating quite a mess. They are rooting for a late-night snack. They leave craters of upturned soil in their quest. I have shot at them twice with a handgun and once with a borrowed .243 rifle, which has a scope and a green flashlight that hogs apparently can’t see. I knew the handguns would be useless since I have no intention of getting close enough to get trampled b 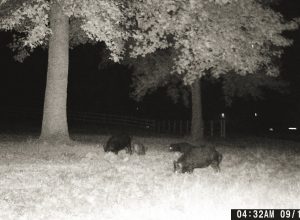 [2]y an angry sow. But the noise would cause them to flee.

(A side note: We are surrounded on three sides by the 50 acres we own, so there is no danger of collateral damage to another house or a passing vehicle. Don’t call the sheriff, please.)

Once I borrowed the .243, my chances improved. My first attempt went awry because I wasn’t patient. The hogs scattered. Finally on Sunday night, after dozing off watching television, I woke around 11:15 and went out the front door with the flashlight. The hogs were back. This time, I was far more deliberate, putting in earplugs, quietly reopening the door, turning on the green flashlight beneath the rifle’s barrel. I sighted through the scope and fired off a round from the front porch to the hogs, which were about 75 yards away. A hog fell! The rest took off. I fired off another round for good measure.

My Beautiful Mystery Companion came out, awakened once again by her wild-haired husband holding a rifle, in his bedroom shorts and sock feet. “You got one!” she exclaimed. Indeed, I did and went to bed, knowing that in the morning I would have to haul off the hog.

I’ll spare the gory details. It was a small hog and definitely died instantly. I pulled the tractor around, got the carcass in the bucket and headed into the woods, getting as far away from the house as possible. The turkey buzzards and coyotes will finish the job.

I am ambivalent about my first foray into killing animals. I don’t take any joy in it, but the hogs are a menace. I harbor no illusions that this one hog killing will stop them, but it might deter them for a time. Hogs are pretty smart. So I’m still going out several times each night, thus far relieved to find nothing, and to see no new damage in the morning when I walk down to get the paper.

I have ordered some solar-powered strobe lights from a company that claims they will run off the hogs. Trouble is, the mail carrier misdelivered them and hasn’t been able to get them back. Soon as he does, I’ll put the lights up. Then maybe I can quit standing guard duty each night.