Mystery Vines and a Banana Spider

For the past two summers, a weekend ritual — in addition to mowing, trimming and cleaning up the yard — has been to don a pair of gloves and pull up a 30-gallon trash can’s worth of a pungent mystery vine that threatens to strangle the mature azalea bushes that grace much of our yard.

The mystery vine appeared after the May 2019 straight-line windstorm, which left four trees on our house and several more down in the backyard. When the debris was chain-sawed, chipped and hauled off, much of the back and side yard was now in full sun. That’s when the mystery vine cropped up, winding its way up the azaleas, then spreading across their crowns like a spider web on steroids. Last summer, before I noticed, the vine had completely covered the azaleas in one corner of the yard. A couple hours’ worth of pulling vines and muttering curses under my breath ensued. Thankfully, the vines died off in the winter.

The mystery vines returned this spring and spread throughout the azaleas that line the driveway and throughout the backyard. Even though I wear gloves, there is something in the sap that causes a minor rash on my uncovered arms and bare legs. I have developed a visceral dislike for these mystery vines. Pulling them up adds another hour of yard cleanup, which I could spend reading.

Still, this is a challenge that must be faced, minor in the big picture as it may be. I decided to pull out my iPhone and use the PlantSnap app to see if I could identify the culprit. PlantSnap has proven to be cheap entertainment at $9.99. When on vacation, I constantly used it to identify trees on hikes, or exotic flowers blooming in places like Boston’s Public Garden.

That’s back when we actually went on vacation. Sigh. Now I use PlantSnap to identify noxious weeds in our backyard. 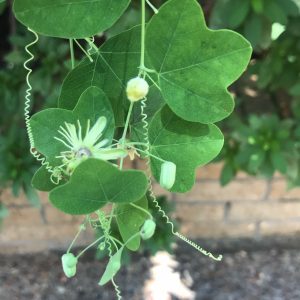 [1]Alas, PlantSnap gave me a different choice each time I focused the phone’s lenses on a leaf. One time it identified it as a Japanese wild cucumber vine. Another time as a bracted passionflower. A third as rough bindweed. All told, PlantSnap gave eight different possibilities, none of which upon closer examination looked like this vine, or they were not found in East Texas, or had a different colored bloom or berry. This vine has a green berry that turns purple and tiny yellow flowers that don’t last long.

Clearly, it was time to call in for expert help, since PlantSnap changed its mind every time I snapped a sample. I emailed a couple of photos to the local county agent, who promptly replied that it was a passion flower. Trouble is, the images in the links she sent didn’t really look like my mystery vine. Close, but not quite. I didn’t want to bug her again, so I texted photos to a buddy of mine who is a retired county agent. We used to run the roads together in San Augustine along with the county judge, drinking beer and solving the world’s problems. (We were young and foolish then; now we’re o 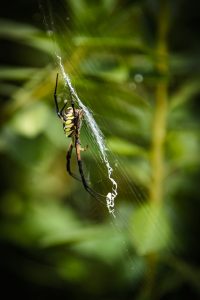 [2]ld and foolish, but not foolish enough to drive around drinking beer. Besides, it was legal back then before open container laws passed.)

He noted that if we were driving around now, he could point out some examples of what he identified as some type of passion vine. It’s apparently a problem in hay pastures if it starts spreading, sort of a minor league kudzu. I Googled “passion vine” and learned there are about 550 species. Folks plant passion vines intentionally and send them climbing on trellises or walls. If anyone feels the urge to plant passion vines, come on over and get some of mine. Bring a mask.

I discovered a large yellow spider while pondering this dilemma, who had woven a web amidst the azaleas. This required hauling out my camera for a photo opportunity. The spider, which my neighbor identified as a banana spider, was a bit camera shy, flipping around on its web as I tried to get a clear shot. My neighbor also noted female banana spiders often eat the male after they mate.

I’ll just leave that right there and go back to pulling mystery vines — with a passion.