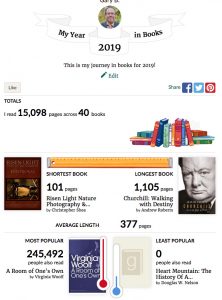 [1]It’s time for the annual review of books read in the previous year. I use the Goodreads app, which allows one to catalog the books finished, what I’m currently reading, and what is on the to-read list. The social-media app is owned by Amazon, which is well on its way to controlling the world.

Like Facebook, one has “friends” on Goodreads, who spy your name on the list and decide to join your online book club. I welcome all but don’t spend much time searching for friends who are on Goodreads. The app’s primary function for me is to replace the handwritten list of books read, which I once kept in the loose-leaf spiral notebook I lug around in my satchel bag. Goodreads is handier.

So, to tally up: In 2019, I read 40 books amassing a total of 15,098 pages. The longest book read — and hands-down the most masterful biography I have read in years — was Churchill: Walking with Destiny, by Andrew Roberts. At 1,105 pages, it is heavy enough to break a barefoot toe if dropped.

But what a wonderful book. My Beautiful Mystery Companion and I were fortunate enough to hear Roberts speak at LeTourneau University last February. He kindly personally inscribed a copy to us, which I treasure. That’s an idiosyncrasy of some bibliophiles, including me. I collect signed copies by authors I enjoy reading.

The shortest book read was Risen Light Nature Photography & Devotional, at 101 pages. I used some of its devotionals while teaching a photography class at the university last fall. Interestingly, the most popular book I read among the 90 million users worldwide on Goodreads was A Room of One’s Own, by Virginia Woolf, which was recommended by a non-Goodreads and actual physical friend. It’s a compilation of two essays Woolf wrote about the constraints women faced at the time — and still likely face — if they wished to become writers: time, space, the traditional duties expected of females during the early decades of the 20th century.

Wolff wrote: In the first place, to have a room of her own, let alone a quiet room or a sound-proof room, was out of the question, unless her parents were exceptionally rich or very noble, even up to the beginning of the nineteenth century. Nearly a quarter-million Goodreads folks also read A Room of One’s Own last year. Clearly, it resonates with many people, as it did with me. It’s also one of just two books I read through the Kindle app. The other one was The Mueller Report. Yes, I read it in its entirety. More people should have.

On the flip side, of the 90 million Goodreads users, I’m apparently the only one who read Heart Mountain: The History of An American Concentration Camp, by Douglas W. Nelson. Heart Mountain, in Wyoming, was one of this country’s Japanese internment camps during World War II. My interest lies in a long-research project concerning my father’s side of the family. My grandfather was a professional Boy Scout for many decades. As a young man, he helped supervise the Scout troops formed on Heart Mountain for the boys held in the camp. I don’t know where that project is headed, but this was a fascinating, if heart-breaking, account of one of the more shameful incidents (there are many) in our country’s history: interring Japanese-American citizens during that war.

A brief sampling of my favorite books of all those read in 2019:

To see the full list, join Goodreads and become my friend. You don’t need my permission. Meanwhile, my 2020 reading list is being compiled. I just cracked open another nearly 1,000-page toe-buster a few days ago: Big Wonderful Thing: A History of Texas, by Stephen Harrigan. It’s been a great way to start the New Year.