Mucking About With the Muscovy Ducks

Just off Judson Road in my hometown of Longview, there is a creek behind an apartment complex that was dammed up decades ago to create a small lake. I lived for about a month at Willow Lake Apartments when I first returned to Longview in 2008, while the house I had purchased was being remodeled. I am not positive that Willow Lake is the official name of the lake (it doesn’t show up on any maps I could find online), but since it is partially surrounded by willow trees, that works for me.

I often cut through the narrow road on the west side of the lake to get from our house to the Big Box Stores. A lot of people do so, since you can avoid a couple of traffic signals. I always drive slowly on Lakeshore Drive, watching out for the Muscovy ducks. They are fond of wandering across the road to peck in the grass of the expansive front yards, filled with bugs. More than once I have stopped in the middle of the road to herd the ducks safely across. Often a vehicle coming from the opposite direction stops as well, watching me play safety patrol officer, the driver smiling.

Sadly, on occasion a Muscovy duck does not make it across the road. Over the years, I have seen several turned into roadkill. The city should install a “Duck Crossing” sign. These domesticated fowl have grown fruitful and multiplied over the past dozen years. I went out to get some photographs Sunday morning. Of course, they were on the opposite shore of Willow Lake, bedded down contentedly on the lawn that slopes from the complex to the shore. There were at least 30, possibly more.

I returned a few hours later. This time, about a half dozen ducks were pecking on the road’s shoulder. I pulled over, grabbed my camera, squatted down and began photographing the ducks. Naturally, they mistook my presence as Someone With Food, and began waddling toward me. I kept backing up. They kept coming. When a few ducks started wandering across the road, no doubt miffed I was foodless, I had to shoo them back while a fellow in a pickup waited patiently. The driver gave me a thumbs up when the ducks got out of harm’s way.

The Muscovy duck has a face only a mother can love, with orange warts surrounding their eyes and often trailing down to the top of the beak. Their feathers are an interesting combination of colors, strangely beautiful up close. According to allaboutbirds.com, the ducks hanging out at Willow Lake are considered domesticated. One would have to travel down to the Rio Grande Valley to find wild versions, which are forest dwellers that build nests in the cavities of trees.

Muscovy ducks are considered to be one of the oldest domesticated fowl species in the world. The website says the name might come from the Muscovy Company, a British outfit that transported these ducks to England and France in the 16th century from Peru and Paraguay, where natives kept them as pets. Aztec rulers wore cloaks made from the feathers. The Muscovy duck bore the title of the totem creature of Ehecatl, the Wind God.

Muscovy ducks clearly love their groceries; the male is the largest duck in North America, but females are just half his size. I can’t tell a male from a female down at Willow Lake, but these are hefty ducks. 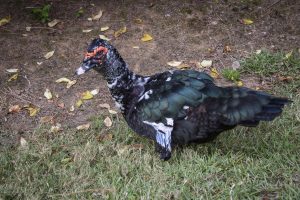 [1]I continued to take photos as an occasional vehicle rumbled past, its occupants likely wandering why this fellow was squatting down among the ducks. Suddenly, something spooked the fowl, and they all darted through a hole in the hedges and back onto the apartment complex parking lot, headed back to the lake. As I stood up, my knees creaking from having squatted so long, I could hear the honking of geese overhead — a harbinger of winter. 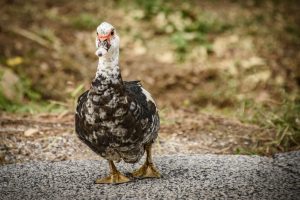