On Aug. 30, about 100 folks raised a glass on Zoom to toast the memory of Molly Ivins, the acerbic and hilarious columnist who died of cancer in 2007. It was Molly’s birthday, and the event was a fundraiser for the Texas Observer, the venerable, gritty progressive magazine that she once co-edited when in her 20s. I have subscribed to the Observer for more than 40 years and have written a few stories for it — the most recent four years ago, the first back in 1982. That first piece, adapted from a creative writing class I took under Bill Stotts in graduate school at UT-Austin, was the first piece I sold to a publication. When the check for $140 arrived a few weeks after publication, I photocopied it and taped it to a bookshelf in my office at the San Augustine Rambler.

A friend kindly offered a ticket to the virtual event, which included a link to Raise Hell: The Life and Times of Molly Ivins, released in 2019. Raise Hell is largely a hagiographic documentary of a celebrated, often hated, but always funny progressive journalist who became a national celebrity. At the peak, her columns appeared in 400 newspapers across the country. I published her work regularly up until her death, in the Nacogdoches and Lufkin papers. No columnist provoked more complaints and outrages, threats (largely unfilled) of canceled subscriptions, and angry letters to the editor. I loved her work and mourned her passing. 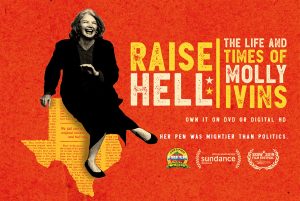 Molly was larger than life in so many ways. She reached a height of 6 feet at age 12, was big-boned and remarked she, “always felt like a St. Bernard among a bunch of greyhounds.” But her imposing stature proved useful when heaping witty scorn on Texas politicians. Whipping her butt was not going to be an option. She won admirers even among those she skewered, because she was so danged funny. As former lieutenant governor Ben Barnes says in the documentary, Molly had a sense of humor that kept pols like him from being mad at her for long. And she would bend an elbow and drink a beer with those same folks, but without being co-opted.

Molly was born into a fairly wealthy Houston family ruled by a very conservative dad. She was the third generation of women in her family to attend Smith College, one of the Seven Sisters private liberal arts institutions in New England. She went on to earn a master’s in journalism at Columbia University and became a reporter for the Houston Chronicle and then the Minneapolis Star-Tribune.

She returned to Texas to co-edit the Observer with Kaye Northcutt for a pittance of what she was making at a metro paper. From there she went to the New York Times, where she wrote Elvis Presley’s obituary and was sent to Memphis to cover his funeral. But the stuffed-shirt structure of the Gray Lady was not a great fit, and eventually she returned to Texas to write for the Dallas Times-Herald. That’s where her columnist career was launched, with syndication putting her in newspapers across America.

As her fame grew, she published books, including co-authoring a biography of George W. Bush titled Shrub. Her co-author, Lou Dubose, notes in Raise Hell that Molly developed an extraordinary Texas voice. “It was her professional Texas voice. It’s sort of like when Samuel Clemens became Mark Twain.”

I vividly recall publishing Molly’s final column in January 2007, as President Bush pushed for a surge of troops in Iraq, which she adamantly opposed, as did many of us. She urged readers to take action:

We are the people who run this country. We are the deciders. And every single day, every single one of us needs to step outside and take some action to help stop this war. Raise hell. Think of something to make the ridiculous look ridiculous. Make our troops know we’re for them and trying to get them out of there. Hit the streets to protest Bush’s proposed surge. If you can, go to the peace march in Washington on January 27. We need people in the streets, banging pots and pans and demanding, “Stop it, now!”

Here’s to you, Molly.

(Raise Hell: The Life & Times of Molly Ivins is available on Hulu or for rent from Amazon Prime.)