Miss Geneva was laid to rest Saturday under a cloudless November sky, a steady breeze skittering leaves across the church grounds. Ebenezer Friendship Baptist, the modest country church she attended for a lifetime – 76 years — was full, as befitting someone who had attended thousands of services, weddings and funerals there. Miss Geneva cooked countless pies, casseroles and other culinary delights for church events. The preacher, who has held the pulpit just six years, wiped away tears while delivering the service. That doesn’t happen very often at funerals, at least in my experience. Too often the person in charge

doesn’t really know the deceased and is reduced to delivering platitudes. Not in this case.

Geneva Ann Pynes was buried following the service in Ebenezer Cemetery, sharing a tombstone with her late husband. A daughter who had died of meningitis at six months is buried beside them, a small stone marking the grave, a stuffed teddy bear propped next to it. Several of Miss Geneva’s relatives are also buried here. A historical marker erected a decade ago notes that land for the cemetery — located on a farm-to-market road in Camp County, a few miles from Pittsburg — was donated in 1857. The first known burial was of infant Pairlie Clementine Bailey in September 1870.

Miss Geneva was my sister-in-law’s mother. I met her nearly a dozen years ago, at an Easter egg hunt held at her house, a few miles from the church. That was my first introduction to my Beautiful Mystery Companion’s rambunctious and extended family. We had only been dating a few months. Miss Geneva hosted the egg hunt each year for her grandkids. Dinner was served, an Easter feast of ham, vegetables, and amazing pies. She greeted me warmly then and every time I saw her, a sweet, gentle woman with glasses and a ready smile, her hair always neatly styled. She was a beautician for more than 40 years.

Miss Geneva was at our home for a family gathering just a few days before suffering the stroke that took her life after a two-week battle to recover. As always, she had brought a dessert, a bag filled with chocolate-chip cookies. 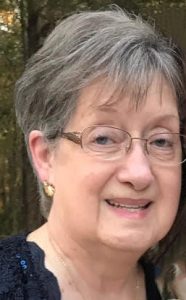 This family I inherited has endured more than its share of tragedies, and plenty of good times as well. Miss Geneva was always with us, just as she was for her church family, the preacher said. Judging from the crowd at her funeral, that rings true. She endured plenty of pain as well over the years, as well as health issues. She survived a bout with breast cancer several years ago, and an almost-fatal car crash some years back. Through it all, she trudged through, no doubt held up by her strong Christian faith.

She was renowned in our family and in that church for her desserts. My two favorite kinds of pies are pecan with dark chocolate morsels – my BMC’s specialty – and coconut cream. Until I met Miss Geneva, my favorite place to get coconut cream pie was at the Headliner’s Club in downtown Austin, on the 21st floor of the Chase Tower. That’s until Miss Geneva brought her version to a gathering, most likely a fish fry. (We really don’t eat like this every day – fried foods and sugar-laden desserts. Just on special occasions.) Her coconut cream pie nearly brought tears to my eyes. I raved about it so vociferously that for my birthday, Miss Geneva baked two coconut cream pies. That’s just how she was.

Miss Geneva’s greatest joy was her family. Her quiet joy and kind spirit made every family gathering more meaningful.

And if a meal was planned, you could be sure she didn’t come empty-handed.

As my BMC put it, “she made the world a better place simply by being in it.”