I have yet to see the barred owl that lives in the woods behind the barn/shop. Not a barn owl, but a barred owl. My Beautiful Mystery Companion has seen the owl twice and says it has an impressive wingspan. The other night, while I was working in the library, she said the barred owl perched for several minutes on the roof of the shop, perusing the terrain below for dinner: field mice, snakes, small dogs… 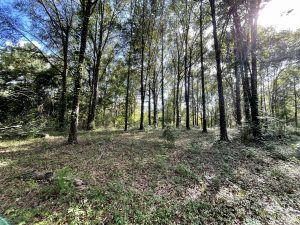 That is why at night when we let our two small dogs out — Rosie and Mollie — we stay outside there with them, even with the backyard newly fenced. Rosie weighs about 15 pounds, Mollie about 9, both almost certainly too heavy to be carried away by a barred owl or red-tailed hawk. But I would rather not be proven wrong. One must be vigilant in the country. Critters abound.

The other morning, I was down in the shop using a foam roller to loosen up my hamstrings before starting a workout. I was horizontal to the floor, propped on my elbows. I sensed some movement on the periphery of my field of vision. Soon I was eye-to-eye with a curious frog. I blew softly toward the critter, who hopped away. Critters abound.

I looked up the difference between a barred owl and a barn owl. Barred owls are large and chunky, with round faces and brown and white bars of plumage. They fly smoothly with a steady flapping of their wings, punctuated by long glides. As first, my BMC thought the barred owl flying out of the trees was a turkey vulture gliding down to a carcass. But a second look confirmed it was a barred owl. She knows birds far better than me. Barred owls prefer large areas of mixed woodland with nearby water sources, such as creeks or wetlands. Our spread is perfect for barred owls. They prefer roosting in trees and hunting at night. Barred owls have a variety of hoots, which one writer describes sounds as, “Who cooks for you?” and “Who cooks for you-all?” In East Texas, that’s likely a “y’all.”

Barn owls have white, heart-shaped faces, are considerably smaller, and never hoot. They screech instead and prefer roosting in, well, barns or other buildings, such as inside church steeples.

Tater and Tot, our two large cats, spent a few days at the cat hotel while we moved, but have lived here about a month. In our previous abode, they were indoor-outdoor cats, housetrained to meow to be let outside when nature called. We decided the feline brothers needed to get used to their new digs before being allowed outside, so I bought a self-cleaning litter box.

The first 48 hours, Tater and Tot meowed all night long, convinced they had been abducted by aliens or some such. Then they settled down and show little desire to go outside. Tot, once a shy recluse, has blossomed as a strictly indoor kitty, perching himself on an end table the better to survey the Great Outdoors out the picture windows. For the time being, they will remain indoor cats. There are coyotes in those woods, I’m sure. Even cats

as large as ours would be no match for a coyote. Critters abound.

My “little” brother Gregg kindly drove in from the Dallas area Saturday to fix the tractor. He was a diesel mechanic in the Marines for 12 years, though he wisely became a database engineer, where he now works under air-conditioning. Turns out I had wired it back incorrectly when replacing a battery terminal. He spent time explaining the various mysterious (to me) parts of the tractor and plans to visit regularly for maintenance and repair advice. I received a grease gun as a birthday present from a brother-in-law, which comes in mighty handy.

After we got the tractor going, Gregg and I walked in the woods along the fence line I mowed a few months ago, which has grown back but is still walkable. We both carried pistols and walked with a sharp eye out for snakes. There is plenty of evidence of feral hogs bedding down here, where the ground is soft and wet, thanks to Glade and Wicher creeks, which intersect on our property. Once it cools off, there is a gaggle of relatives and friends eager to hog hunt. I’m happy to oblige them.