May The Wind Take Your Troubles

“Windfall” was written 25 years ago by Jay Farrar of Son Volt, a fine Americana band whose music I haven’t listened to in years. It popped up in one of the mixes that Spotify creates based on what else I have been listening to. The song is partly about taking a road trip and trying to catch a radio station’s signal while driving in the boonies.

Most mornings, I switch from Red River Radio to Spotify once “Morning Edition” ends. Spotify’s playlists have introduced me to talented singer-songwriters I have not heard before, mixed in with my perennial favorites — John Prine, Lucinda Williams, Nancy Griffin and Jason Isbell, to name a few. That’s how Son Volt crept back into my audio picture. “Windfall” gets played at least once a day. It fits the times. Plus, it brings back sweet memories of past road trips and vacations with 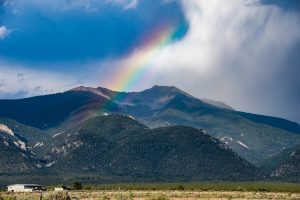 We visited Big Bend, spent a lovely evening looking at the stars through telescopes at McDonald Observatory in the Davis Mountains, ate lunch in Marfa, had a drink at the Gage Hotel in Marathon. We traveled the Wild Rose Pass, the highway between Fort Davis and Marfa, which is one of the prettiest stretches of road in Texas. Nice memory of that first year of us being together as a family.

There will be no road trips this summer, and probably not this autumn either, since there is no reason to believe COVID-19 is just going to disappear, as our delusional president claims. In early June, we briefly began plotting a return to Taos but quickly abandoned that notion as cases started spiking — and continue to do so.

So we’re homebound with great memories of past adventures and hopeful to hit the road again once a vaccine is developed. It’s a minor inconvenience in the great scheme of things.