This is Banned Books Week, launched in 1982 to call attention to attempts to keep certain books out of circulation. At the Margaret Estes Library on the LeTourneau University campus, where I work part-time weeknights as a reference assistant, the student worker in charge of promotions and social media put together a compelling exhibit to note the week. Construction-paper flames and the word “BANNED” in fiery red lettering peeped out of books around the library. A banner proclaiming Banned Books Week hung from the ceiling. Lots of students asked what it was all about, which was the intent of the exhibit. 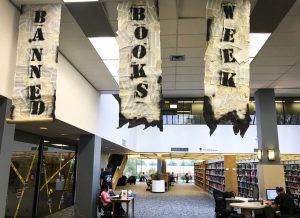 Students tonight can view a showing in the library of Fahrenheit 451, adapted from the Ray Bradbury book of the same name, which involves a society in the future where books are banned and burned.

So, are books still actually banned from libraries? The short answer is sort-of. From what I could research, the most common “banning” is from school libraries, primarily private, when a parent objects to a title being available to his or her child. Perhaps the main characters are gay, as in Two Boys Kissing, which was challenged by parents a few years ago in a Virginia school district. The Harry Potter series by J.K. Rowling was removed from a Catholic school library. And many of the classics that have been banned over the years still make the list – Of Mice and Men, by John Steinbeck; To Kill a Mockingbird by Harper Lee; and, yes, Bradury’s Fahrenheit 451.

Certainly, parents have every right to restrict what their child reads. I personally never tried to control what my daughters read. In fact, it never occurred to me. In this era of readily available smut, violence and all manner of nasty stuff online, a book seems harmless by comparison. But parents certainly have the right to keep a book out of their child’s hands, as long as they are legally responsible for him or her. But parents should not be able to stop other children from reading a book to which they object by getting it pulled from the shelves.

When I was at L 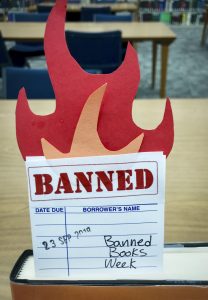 ongview High School, just after electricity was invented, a school board member succeeded in getting books written by James Baldwin — author of The Fire Next Time and Go Tell It On The Mountain, among others — banned. Last year, the most popular banned book was 13 Reasons Why, a tale of the challenges of adolescence, controversial because it delves into teen suicide. (It’s also now a Netflix series likely seen by far more teens than read the book).

James LaRue, with the American Library Association, was interviewed recently in the Washington Post by book critic Ron Charles. LaRue took issue with Charles’s assumption that only conservatives are trying to pull books from libraries. There have been attempts by some backers of the #MeToo Movement to pull titles by writers accused of sexual misconduct. This seems wrong-headed. Should libraries also pull titles by folks convicted of other crimes? Not in my view. That sends us down a path from which it is difficult to see daylight. Should Hitler’s Mein Kampf be banned so an impressionable mind doesn’t decide to become a white supremacist?

LaRue, in the Post piece, says that Banned Books Week brings awareness to the growing reluctance to allow different voices to be heard if they are controversial. In this starkly partisan era, controversial speakers on both ends of the political spectrum have been run off college campuses because those opposed to the political views being espoused threatened violence or at least attempted to stop the speaker through disruptive protests.

The library, LaRue points out, is a place where, perhaps, we can still find common ground. As he says, “Everyone is welcome. Even the books on our shelves may disagree with each other, but there’s a tacit understanding that this is a place where you have the right to investigate the choices and make up your own mind.”