Love Your Neighbors; Wear A Mask

“Teacher, which is the greatest commandment in the Law?” 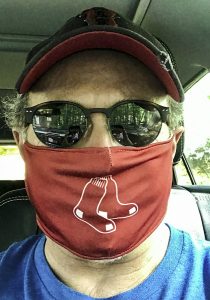 The pandemic has brought out both the best and the worst in people. The best includes health-care workers, first responders, grocery store workers, delivery truck drivers and all those working on the front lines. The worst: those who refuse to take this unprecedented pandemic seriously.

Locally, I have watched in dismay as folks not wearing masks walk right by a large sign at a local home improvement store that says, “Masks Required!” I watch them walking the aisles, their faces defiant, almost daring someone to stop and tell them to wear a mask. (That can be dangerous, as numerous incidents elsewhere have shown.) I dashed inside a local health-food store the other day and spotted both employees and customers not wearing masks, passing each other within a foot or two because the aisles are so narrow. I won’t be back — ever.

Meanwhile, at least 130 grocery workers in the United States have died from COVID-19 and more than 8,200 have tested positive, according to media reports. These are folks rarely making more than $15 an hour, if that. More than 900 front-line health-care workers have died of COVID-19. That is according to a new database unveiled this week by The Guardian and Kaiser Health Network. A Washington Post story this week notes that while the official U.S. death count now is 162,000, the true toll is likely more than 200,000. Another report predicts deaths will top 300,000 by year’s end. To put that in perspective, that is roughly equivalent to wiping out the entire populations of Gregg, Rusk, Harrison and Upshur counties.

With schools opening, it is highly likely cases will soar. I pray that is not the case, of course. And yet, one of the simplest safety measures that can be taken is still ignored by a significant minority of people — wearing a mask over one’s nose and mouth. I venture to wager that if these non-mask wearers were asked if they followed the teachings of Jesus, nearly all of them would respond in the affirmative, as do I. This is East Texas, after all.

Yet, if we are to love our neighbor as ourselves — the second greatest commandment — doesn’t that mean we should do everything we can to protect our neighbors? We should use the brains God gave us to follow the advice given by scientists. Quit becoming amateur epidemiologists, like our perpetually befuddled congressman, Louie Gohmert, who theorized his decision to finally wear a mask is why he tested positive for the virus. No, Louie. You tested positive likely because you walked the halls of the Capitol mask-free for months. Even your daughter publicly chided you for ignoring medical advice.

I understand that we cannot shut everything down again, that we have to try to hold school in-person, that this virus is going to be with us forever, and until there is a vaccine we will remain at risk. There is no disputing that the virus has had a devastating economic effect on millions of people and thousands of small businesses. While it is true that most people have mild or no symptoms, the virus has killed people who had no underlying health problems — including children. Not doing everything one can do to stay safe — and in turn allow others to safely go about their lives — is hardly following Christ’s commandment.

Love your neighbors. Wear the mask. Listen to the scientists.