Judging Newspaper Contest After a Pandemic

I spent several hours last week judging entries in a Better Newspaper Contest for another state’s press association. Newspaper associations often “swap” judges for these annual contests. Members of the Texas Press Association agreed to judge the entries for this state, and its members will do the same for TPA. I volunteered to judge a few dozen entries in four categories. 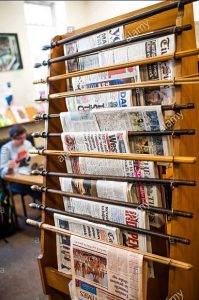 [1]Entering these newspaper contests used to be a dreary, time-consuming affair back in prehistoric days. Someone in the newsroom, usually me as editor, had to flip through bound books of back issues, select the stories, photos, etc. for each category — and there were usually at least a couple of dozen entries — go to the morgue and pull the copies. It was messy drudgery, but most newspapers did it to possibly win some modest bragging rights and slap another plaque on the wall. And it is nice to be recognized by one’s peers in any endeavor.

These days, electronic versions of the entries are uploaded on to a website, which makes it easier on both the entrants and the judges. You don’t have to wait for the entries to arrive, wade through piles of newsprint spread out on the dining room table, get ink all over your hands. It is much easier to view entries side-by-side on the screen.

The entries had to come from March, November and one month of the entrant’s choice. Contest organizers do that intentionally to make the competition fair. But picking March 2020 led to some interesting entries, since that is when the world shut down. (Bet you remember that.) These were all weekly or twice-weekly newspapers in smaller communities. Some who entered their first issue in March barely mentioned the pandemic, filling their front pages with the usual fare of small-town papers: accounts of city council or school board meetings, reports on storm damage, or a vehicle accident. One publisher who writes a column pooh-poohed the severity of the spread of COVID-19, noting correctly at the time there were no cases in the county in which he lives.

Front pages submitted from the latter part of March were filled with pandemic news: schools shutting down, restaurants closing, mask-wearing urged but not mandated. Newspapers had to change their way of operating as well. Their offices were closed to the public, with most of the staff reporting and filing their stories from home. Retail advertising, still the primary income generator for newspapers even as it has diminished mightily, dried up even more. In a few cases, the contest submissions later in the year indicated two or more weeklies owned by the same company had combined into one issue now serving three communities.

The primary factor that stood out with these entries is how hard the staffs of these newspapers worked to provide the best coverage they could to their readers. Weekly newspapers usually have two-to-three reporters at most, who must cover a gamut of stories. With most of the entries I examined, they did so with care and concern – in the midst of a pandemic. One journalist stood out in particular, publishing up to 10 stories each week, including driving 200 miles roundtrip to cover the Legislature in his state.

I hope readers appreciate the efforts community newspapers have been making since March 2020 to continue to provide the news that readers need — to know what their local governments are doing, the triumphs and tragedies of their community, and how their sons and daughters fared at track meets, volleyball games and other athletic events.

Judging contests is always somewhat arbitrary, even when the coordinator provides a rubric. Having been on both ends, submitting entries and now judging them off and on for a couple of decades, I always strive to be positive in my remarks. I have sat where they now sit and know the challenges they face.

I have long been charmed by the slogans many newspapers place beneath their front-page nameplate. For example, the Center Light & Champion, now published for the third time in the past nearly four decades by my buddy Leon Aldridge, pronounces on PI that it’s Covering Shelby County Like the Pine Straw Covers the Ground. Here are a few slogans I picked up while judging entries:

Finally, my favorite, from the Aspen Daily News:

Words to live by.