It Has Been A Rye Experience

We have a small patch of yard in front — about 20 feet by 30 feet — surrounded by mature azaleas and towering trees. The patch was scraggly grass and moss when we bought the house 5 ½ years ago. Over the years it deteriorated into largely dirt. Moles invaded, turning the soil spongy. So I buttonholed a landscape architect working next door and asked his advice on what would work best. “Plant San Augustine,” he said. “It will last at least a few years.” Since we plan to put the house up for sale and downsize fairly soon, that sounded like a plan.

I hired two teenagers to scrape off the scrub and spread a yard of dirt hauled in with our 1965 Ford F100 (still for sale. Sigh.) They laid down $800 worth of sod. I paid the guys a couple hundred bucks for their labor. As instructed, I watered for a few minutes daily. Soon, we had a luscious green lawn. I cut back on watering, fertilized it, and set the mower on its highest setting so as not to scalp the sod. I did everything required.

After a month, the 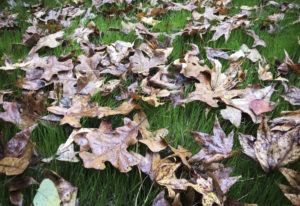 [1]sod began turning a sickly yellow, than brown. First, it was in the especially shady parts, but then spread quickly. Within three months, my $1,000 investment actually looked worse than what had preceded it.

I called the county agent, who readily came out to inspect. He advised I till the soil, spread herbicide to kill the grub worms — which attracts the moles — and plant turf ryegrass. That is important. Both he and I in the past have made the mistake of planting pasture rye grass in a yard. That variety grows before your eyes, rising toward the sky seconds after it is mowed. I spent a cold, wet winter mowing grass twice a week that year.

This variety grows to a certain height and stops, the agent said. But first I had to rent a tiller and chew up the soil. I carefully marked all the sprinkler heads with flags and commenced to tilling. I successfully wrestled that beast around the sprinklers, making a mental note to suggest that tilling could be one of those crazy CrossFit exercises. After all, we were out back flipping massive tires the other day. Why not tiller wrangling?

After I finished I began raking the soil, pulling out dead grass and tree roots and… two strands of wire. Ugh. I had tilled up the sprinkler wire. I ran to the box and turned on that zone. Nothing. In fact, the four first zones watered by the system no longer worked. The two wires sticking out of the ground were about 8 feet apart. I headed to the Big Box Store to buy some sprinkler wire and waterproof wire caps, confident I could splice the lines back together and not have to call a sprinkler repair company.

As usual my confidence was misplaced. I wired the six color-coded strands together, but the sprinkler still did not work. I double-checked my work. No luck. I left a message with a sprinkler fellow. Of course, it was the weekend, but he called back and came out on Monday. It turns out I had cut the wire in another place. We both wondered why the original installer had buried the wire not even two inches beneath the soil. Another $100 went out of my wallet for the repair.

I spread the rye grass and tamped down the soil with a lawn roller. For several days, nothing happened. I watered for two minutes each afternoon. Great. I was going to be out another $60 for the seed. Then, on Sunday morning, I padded out to get the paper and stared in surprise at a carpet of bright green grass sprouting up among the leaves. Instant lawn!

The rye grass will survive until May or June at the latest. That gives me six months or so to come up with a new plan to cover this small patch of ground. For now, I’m enjoying the sight of autumn leaves scattered on a carpet of green.