Four years ago, I sat in the outfield grandstand of Minute Maid Park and watched the Red Sox demolish a miserable Houston team that would go on to lose 111 games that season — its third-straight year of losing more than 100 games. The tickets were cheap, and there appeared to be more Red Sox fans around me than Astros backers. The “Lastros” were lustily booed by their “fans” that night and at many succeeding games. The Red Sox would go on to win their third World Series in nine years.

But the Houston front office had a plan to rebuild this team, and close followers of baseball noticed. Sports Illustrated went out on a limb the following June, in 2014, and predicted the Astros would win the World Series in 2017. That cover is now fetching hundreds of dollars on eBay, though you can buy a replica directly from SI for $20. Sure enough, in case you have been hiding in a cave, the Astros captured Game Seven of the World Series two nights ago, beating the Los 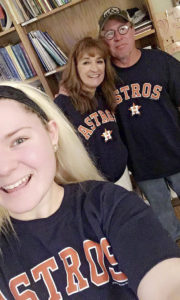 I stayed up far past my normal bedtime for those seven games. Sure, I’m a Red Sox fan, but the Astros have long been my second choice. After they dispatched the Sox in the opening playoff in four games, my allegiance quickly shifted south. Plus, it is hard to root against a team that represents a city recently hammered by Hurricane Harvey. Thousands of folks are still trying to recover, their homes either destroyed or badly damaged. Businesses are still closed, schools shuttered and students relocated to other districts.

Those of us not directly affected by such disasters — hurricanes, fires and earthquakes all occurring in rapid succession the past few months — tend to have collective amnesia, once the initial disaster has passed. We forget people are still suffering — in California from fires, in Mexico City from two earthquakes, Puerto Rico and the Virgin Islands from Hurricane Maria, Florida from Hurricane Irma — and Houston and Southeast Texas from Hurricane Harvey. I have been to and through Houston several times since Harvey, and spent four days helping my daughter and son-in-law get their brewpub/restaurant back in business after a foot of water flooded it. Full recovery for many Houston residents and businesses is well down the road. Luckily, my peeps are back in business and doing well. They set up their movie screen outside at the brewpub for Game Seven.

Houston’s residents deserved a diversion, a chance to root for a stellar Astros team. Minute Maid Park was filled with approximately 40,000 fans, who came to watch the game on the big screen for free. Across Houston and Southeast Texas, folks with gutted homes under reconstruction, or still living in hotel rooms or ensconced in travel trailers, parked in front of televisions to watch the game. It was a chance to possibly witness history, the first World Series championship since the team was formed in 1962.

We had searched in vain for Astros T-shirts to wear during the Series. None were to be found locally. Finally, I found some on a Big Box Store’s website and ordered them. But there was a delay, and I canceled the order since they would not arrive before the end of the Series. Somehow, my cancellation was ignored, and the UPS fellow dropped them on the front stoop three hours before Game Seven began. I quickly laundered and dried the shirts, presented them to my peeps just in time to don for the game. We did our part to facilitate a win.

My middle daughter Meredith posted this comment on Facebook the morning after the Astros clinched the championship. She lives in — and loves — Houston: May never stop crying every time I remember that the Astros won their very first World Series two months after we all almost floated away.

I imagine there are a lot of folks in and around Houston who feel the same way.