Hogs Going Wild on Our Farm

The damage in our front yard was immediately apparent Monday morning: several yards of grass trampled and rooted through, leaving a mess. It was along the drainage ditch by the driveway, which is still too wet to mow. I’m beginning to think there is a spring that has sprung back to life because of the spring rains.

At first, I thought the damage was caused by armadillos, but it was too much. I had just mowed the previous afternoon, so I knew the damage was fresh. Feral hogs apparently weren’t content to hang out in the woods near Glade and Wicher creeks, which run through the south and east portion of our property. They had decided to attack the front yard.

Feral hogs are overrunning much of Texas. According to the Texas Parks & Wildlife Department, the only county free of feral hogs is El Paso. It is estimated that our state contains 2.6 million of these large pests. The hogs are found in 35 states and continue to proliferate because of a high reproduction rate, what TPWD terms a generalist diet, and no natural predators.

It was time to formulate a plan of action before the hogs turned our front yard into a mass of craters that will be difficult and possibly dangerous to mow. I once had a dozen or so cows on 15 acres outside Nacogdoches. The hogs had torn up one pasture so badly that I couldn’t safely bushhog it for fear of tipping over the tractor. I borrowed a hog trap and baited it with corn soaked in diesel fuel. The plan was to trap the hog, humanely shoot it in the head, then drag out the carcass. Maybe this would scare off the others. Feral hogs are wily, cautious creatures. But the hogs kept going bonkers in the trap and ended up beating themselves to death. I then had to hook a chain to the hog’s front legs and drag it off into the woods. After the third time this happened, I gave up on trapping. I guess the hogs got the message because they moved on to more hospitable haunts. 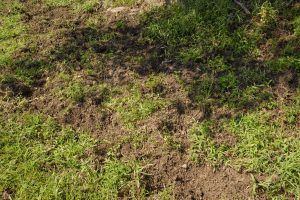 I was pondering all this while heading home from my evening library shift at the library on Monday evening right at dusk. I slowed down and switched on my bright headlights while crawling up our long driveway, looking for hogs. None were out. I went outside, took a shower, poured a glass of wine and sat down to watch a couple of episodes of Why Women Kill. My Beautiful Mystery Companion was already in bed, which was fine because I don’t want her to get any ideas from that show.

After it was solidly dark, I grabbed a flashlight, stepped out on the front porch and shined it where the hogs had done their damage. There they were, two big sows and a half-dozen or so offspring. I sprang into action. The only quickly accessible weapon was my snub-nosed  five-shot .38 special, only useful at close range. No matter. I crept out the back door, flashlight in one hand, pistol in the other, but wisely stopped to put on earplugs. I stealthily slipped down the driveway until I was about 30 feet away, and fired off a round, fully realizing I had no chance of actually hitting one of these pests, with a flashlight in my left hand and the pistol in my right. Boom! Man, that .38 special with its short barrel was loud, even when wearing earplugs. I fired again.

The hogs scattered across the driveway and bunched up along the fence. They just looked at me, so I fired off the last three rounds, while advancing toward them, Rambo-like. Finally, they ran into the woods down by the highway.

I turned around to spot my BMC in the driveway, sleepily rubbing her eyes. She knew why I was shooting, but still was a bit surprised. “I didn’t hit anything but at least I ran them off,” I said proudly. She went back to bed once she quit laughing at the sight of me in my sleep attire and paint-spattered Crocs, gun and flashlight by my side.

My hope was the hogs will go somewhere less noisy. If not I’m now more sufficiently armed, with my .20-gauge pump-action shotgun and a long-barreled .357 both waiting near the front door. After taking an evening off, they showed up again Wednesday evening. Once again, I marched down the driveway, this time with the .357 and emptied the revolver in their general direction, again with no casualties.

The next morning, I noticed the neighbor up the hill about a quarter-mile had hog damage in the front yard. Sorry about that. But this is war, and I intend to remain vigilant in my nightly hog patrols.