Having The Write Stuff

My Beautiful Mystery Companion gave me a handsome Gentlemen’s Hardware logbook for my birthday a few months ago. It is 51/2 by 81/2 inches, wrapped with a cloth strap and Velcro to secure it. The strap has a pencil holder, and the logbook has a ribbon to mark what page you last wrote upon. My original plan was to leave it in the glove compartment for taking notes while on the road, but it is too large for that. So I have begun using the logbook to make lists of things to do, or recording what occurs at meetings, or while on conference calls. It is old school, but I like its heft, the sturdy covers and lined pages.

Writing on paper forces me to write slowly and legibly, two habits long abandoned. My handwriting has deteriorated over the past 40 years, since I started using a keyboard, to the point that even the checks I write look as if I have the shakes. I decided it was lack of practice and have embarked on a conscious effort to improve my handwriting, which has long been a combination of block lettering and cursive.

I inherited my poor penmanship from my late mother, who was kn 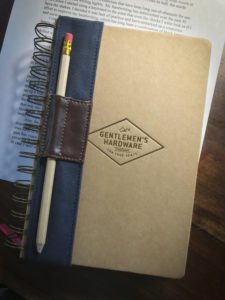 [1]own for sending letters that appeared to be written in an ancient language known only to her. Before she began using email, I often would call her to decipher parts of a letter. If I had taken after my father, a skilled sign painter, we would not be having this conversation.

Few public schools teach cursive writing any more because everyone is tapping on some type of keyboard. That was not the case when I was a child in the age when dinosaurs roamed the land. We actually had a course in penmanship at Allenstown (N.H.) Elementary. A few times a year, Mr. Penmanship visited, as I have noted before.

He was a circuit-riding preacher of neat handwriting, traveling from town to town not on a horse or burro, but in a Volkswagen, which was nearly as primitive in the 1960s in wintry New England. And like those frontier men of the cloth, Mr. Penmanship had a mission, though it was more of a secular nature.

Mr. Penmanship taught the gospel of writing neatly, of dotting your “i”s and crossing your “t”s just so — not slopping over or below the lines. He was a true believer with a strange job. He clearly derived satisfaction from it. Mr. Penmanship would appear at a school assembly to teach us the Rinehart Method of Handwriting. He set up a blackboard with printed horizontal lines on it, whipped out a piece of chalk and preached the gospel of closing loops and putting periods a precise distance from the last letter of the sentence. He was a meticulous, cheerful man, and he wanted us to be that way too. Good penmanship, he implied, was high up there in the cosmic order. Godliness, cleanliness and then neat handwriting are how Mr. Penmanship put things in order of importance.

Alas, the latter did not take with me. Neat handwriting and I have never been close acquaintances. In my many years of taking notes while covering stories, I developed my own form of shorthand, as most reporters do. It was messy, but I could read it. But for the past few years I have lugged around my Macbook Pro when conducting interviews or covering school board meetings. Of course, I always carry a notebook and a couple pens in case I spill iced tea on the keyboard and fry the Mac.

My handwriting steadily got worse, since it was confined to writing a few checks a month or making a grocery store list. That is what has prompted me to begin committing more tasks to paper rather than on a screen. Not that I am about to start writing these modest columns by longhand. That would be taking matters too far.