Furled Flag A Metaphor For Our Times

An American flag hangs from our front porch. The flag is three-by-five feet. It is attached to a pole that juts diagonally from a porch post. The flag often gets wrapped around the pole when a breeze kicks up, often winding itself four or five times around the pole. When that happens, I hold on to the post with one hand, lean out and unwrap the flag — whose corner I’m barely able to reach — so that it hangs properly once again. I have repeated this action hundreds of times in the eight-and-a-half years we have lived in this house. 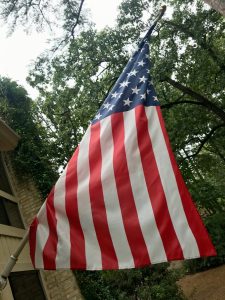 [1]During the last several months — with a pandemic killing more than 200,000 Americans and nearly a million people worldwide — with a deeply polarized nation facing the most momentous election of our lives — with at least 20 million people out of work, with no health insurance or money to pay rent — with street protests across the nation — that furled flag for me has been a metaphor for the condition in which America finds itself — wound tight against itself, drooping, no longer a beacon of hope to the rest of the world.

In fact, we are pitied by many citizens of other nations, who watch in disbelief as the virus takes its toll. One in five reported deaths from COVID-19 in the world have occurred in the United States — though we comprise but 4.25 percent of the world population. Some argue, perhaps justifiably, that some countries, such as China, have hidden the number of fatalities. That still doesn’t explain how the supposedly greatest and richest country in the world has had such a high death rate and such a poor response from our leaders. We must hold them to account.

Five years ago, I wrote about the opening scene of the first episode of the television series “Newsroom,” which has stuck with me since I first saw it several years ago. Actor Jeff Daniels portrays news anchor Will McAvoy, the star of the fictional Atlantis television network. McAvoy is seated at a panel discussion in a university auditorium. A student asks the panel, “What makes America the greatest country in the world?”

Others on the panel respond with the usual patter about freedom and the American way, while McAvoy tries to avoid answering the question. But the moderator keeps pressuring him to respond, and he finally does. It is a tough scene to watch. McAvoy profanely eviscerates both the student and his fellow panel members after replying, “It’s not the greatest country in the world, professor. That’s my answer.”

And he proceeds to enumerate why he thinks so — points he made that I am updating here:

The pandemic has highlighted a number of inequalities and outright failings of our country:

The skies cleared after a few days of rain from Tropical Storm Beta. (They ran out of “real” names.) The flag dried and is blowing in the breeze, unencumbered no longer. I feel a ray of hope for our country’s future.

But it hangs by a thread. Go vote.