We assembled at the Olive Garden to celebrate Colton’s birthday. He’s our daughter Abbie’s boyfriend, a hard worker and good guy. Since it was his birthday, he got to choose the restaurant, so the Olive Garden it was. As we were diving into the famous endless salad, my Beautiful Mystery Companion noticed a tiger-striped kitten outside our window amidst the shrubbery. It was clearly a stray, a tiny thing with big ears and white-mitten paws.

She gave me that look. Oh boy, I thought. Here we go. Another rescue animal in her sights. Sure enough, after the leftovers were packed and the bill settled, we headed outside in search of the kitty. However, two other folks had the same idea. I silently breathed a sigh of relief. The kitten was adorable and needed rescuing, but I was fine with said rescuer being someone else. 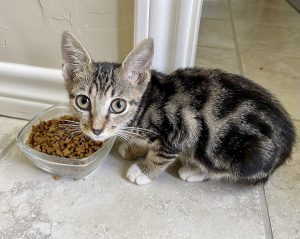 As is typical of stray kittens, this little fellow was wary of the large man looming over her at the behest of his wife, who apparently was still inside. We watched as he would get close, then the kitten would dart away. He gave up, as did the another couple.

But not Abbie. The kitten darted under a portable building behind the Olive Garden. Soon Abbie was sprawled on the pavement, her arms and head stuck under the building, trying to coax her out. (In my head, all kittens are considered female until proven otherwise by a qualified veterinarian or tech.)

We stood back and watched for what seemed like 30 minutes. At last, Abbie wriggled backward, kitten in hand and gave it to her mom, my BMC. The kitten immediately jumped out of her hands and dashed back under the portable building. Abbie gave her mom a look, then got back down on her stomach and started trying to coax the cat out again. She is quite the cat whisperer, the only person that one of our other cats, Tot, will allow to cut mats out of his fur. Soon she emerged again, triumphant. This time, my BMC held on to that kitten for dear life. Abbie was the hero, a plaudit well-deserved.

Safely inside the car, my BMC fed the kitten a piece of leftover shrimp from the Olive Garden, which she greedily gobbled down. Then she ate another. I stopped at a dollar store to get kitty food while she devoured some of our leftovers.  Once home, I got a litter box, and we closed off the guest bathroom for our newest arrival. My BMC filled a bowl with water, another with dry food. The kitten ate some more, than curled up in my BMC’s lap, as she sat on the floor, both purring contentedly. These rescue critters know when they have won the lottery, which happens anytime my BMC is the rescuer.

In the main part of the house, the two grown cats, Tater and Tot, and the carpet dogs, Rosie and Mollie, eyed me suspiciously. “What’s going on back there?” I could almost hear them asking. For now, until we get her checked out at the vet, the kitten remains in isolation. Introducing her to this quartet of critters will take some time and deliberation. Plus, she needs to put on some weight to compete with these knuckleheads.

My BMC, in trying to persuade me that we needed this kitty, said, “It can be a shop kitty,” that will take care of the field mice who appear to have taken up residence down there. That will never happen. This kitty would be nothing more than a light appetizer for the predators lurking in the forest behind the shop: barred owl, hawks, coyotes, water moccasins and Lord knows what else. Nope, she’ll be under the 24/7 protection of the house for the foreseeable future.

We settled on a gender-neutral name for the kitten, though as I have said many times naming cats is about as useful as naming rocks. One can imagine a cat knows its name, but it’s self-delusion. In honor of where we acquired her — the Olive Garden, home of endless salads and breadsticks —we’re calling her Ollie.

Welcome home, Ollie. I think you will like it here.