Does Anybody Really Know What Time It Is?

Once again, we have gone through the ritual of changing our clocks, this time reverting to standard time and regaining the hour of sleep stolen from us in early March. Our dogs now start whining to be fed at 6 a.m. since their internal clocks think it’s breakfast time, generally served at 7. The sun rises earlier and sets earlier, both of which are fine by me. I awake with the sun, so this means I rise earlier and feel more productive. That might be pure perception, but it works for me.

Of course, falling back means 2020 is one hour further away from coming to its end — and this has been a year best seen the rearview mirror. Hindsight is 20/20, after all. That’s unless you live in Arizona, which does not observe DST. Arizona gets more than its share of sunshine as it is, without adding an extra hour of daylight when it’s 115 degrees. Hawaii doesn’t follow DST either. 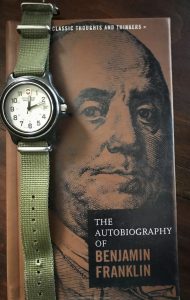 Among the common but mistaken beliefs about DST is that it was invented by Benjamin Franklin. At the age of 78, while serving as America’s envoy in Paris in 1784, he wrote a satirical essay after crankily waking to an early summer sunrise. Franklin wrote that Parisians could save tons of money by getting up early and not using candles. He did espouse the virtues of “early to bed, early to rise,” after all.

The first person to propose the idea was an entomologist in New Zealand who wanted an extra two hours of daylight in the summer to go bug hunting after work. He was ignored. Similar, but independent, ideas took hold in Great Britain but failed to gain passage in Parliament. Germany became the first country to enact DST in 1916, during the Great War, in order to conserve electricity. Britain followed suit with what is known there as “summer time.”

Daylight saving time (there is no “s” on the end of “saving” though most everybody says it that way) was adopted in the United States on March 31, 1918 as a wartime measure. Contrary to what most of us were taught, it was not implemented to give farmers more time to work their crops. In fact, agrarian organizations opposed it and led the fight for its repeal a year later. Congress overrode President Wilson’s veto of the repeal bill. What followed for decades was a confusing patchwork of start and stop dates for DST. According to history.com, passengers on a 35-mile bus ride from Steubenville, Ohio to Moundsville, West Virginia passed through seven time changes. That’s enough to cause carpal tunnel syndrome just from resetting one’s pocket watch.

Does DST result in energy savings? Most studies, according to history.com, say savings are negligible. Those of us living in Texas likely end up spending more money running our air conditioners since it stays light — and hot — later into the day. And the time change has been linked to increased risk of heart attacks and car accidents due to that lost hour of sleep that we got back last Sunday morning, according to a study by the University of Colorado. Hmmm. I’m skeptical a single lost hour of sleep on a Sunday has much of an effect on one’s health.

Still, I’m not a fan of messing with the time and resetting approximately a dozen clocks throughout the house. Let’s just stick with standard time. Admittedly, this will be a low priority when Congress reconvenes.