Confessions of A Book Addict

I am about to offload a few boxes of books to my older daughters, Meredith and Kasey. I have no choice in the matter. There are books in every room of this big ol’ house. My study contains two walls of floor-to-ceiling bookshelves that have reached capacity. All the other places for books in bedrooms and living areas are filled as well.

Something has to give. I will start with fiction, especially old best-sellers that I will never read again or need for reference — Tom Clancy, Stephen King, Tony Hillerman. I’m loath to relinquish any biographies, histories or other nonfiction. I might need to revisit these someday. The plan is to fill up at least three boxes, the kind in which printing paper arrives. That will free up enough space to Buy More Books!

This will be the third time I have culled my collection. About 15 years ago I got rid of most of my small paperbacks, largely gobbled up by Kasey and Meredith. There were some with which I couldn’t part — On the Road by Jack Kerouac, Democracy in America by Alexis de Toqueville, Plato’s Republic, among others. I have been toting those around for nearly a half-century. Then, a couple years ago I donated most of my Texana collection to the East Texas Research Center at Stephen F. Austin State University. Prior to that, I had given them all my photographic negatives, prints, research files and anything else they would take.

Still, as Meredith put it, she and Kasey will be happy to benefit from my book addiction. I do not plan to stop buying books, any more than I plan to stop breathing. When the latter occurs, the book-buying will end, but not before.

I began buying books, and not simply borrowing from the library, in high school. Jim and Julia Barron founded the Golden Hour Bookstore on High Street in 1972, when I was a junior. I quickly became a steady patron, spending some of the money earned at Made-Rite Bottling Co. on paperbacks, a few of which I still own. Barron’s is still in business, of course, with a fine café, gift store. It still sells books by local authors, including me.

In 1974, after a year going to night school at Kilgore College, I headed to Stephen F. Austin State University in Nacogdoches. A friend and I decided to open a bookstore, since there wasn’t one in town except for two textbook stores. I was 19 years old and sold a well-used VW bus for my half of our meager capital. We rented a small two-story house on North Street next to the fire station and bought as many books as we could afford — which wasn’t much. Later, we moved closed to campus and added record albums, but we were always broke, working other jobs while still going to classes.

But, man, it was fun. We lasted not-quite two years before selling our stock to a competitor and liquidating. Some of those books still grace my shelves, 45 years later. And there are days I still dream of opening another bookstore, th

ough the urge passes. I confess that I buy most of my books on Amazon, but I never miss an

opportunity to stop at a locally owned store while traveling and making a purchase.

Until his death, I was friends with Monk Willis, a fascinating character and one of the most avid readers I have encountered. Monk was 92 when we first met at his home on Noel Drive in S 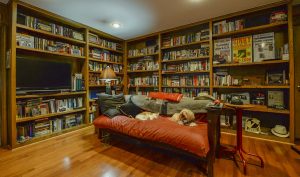 outh Longview. His entire house was lined with books, which also were stacked on the dining room table, and beside his reading chair. I asked him early on where he bought his books. He looked at me as if I were daft, which was not far off the mark.

“Amazon, of course!” he said. Monk kept buying books until he got too sick to read a few years later.

That’s my plan as well. My daughters will continue to benefit from my book addiction as shelves fill.