Coming Home to The Critters

I have switched to working a night shift at the Estes Library at LeTourneau University two days a week, getting off at 10 p.m. This frees me up to teach an Introduction to Photography course on Tuesday and Thursday. It is the first time in anyo 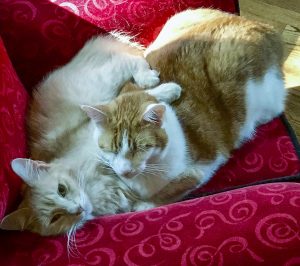 ne’s memory such a course has been offered at LETU, so I am starting from scratch building the course with a full class of 20 students. It has been fun so far as we finish our second week. More on that in the weeks to come.

By the time I get home, take out the dogs, shower and plop down in the easy chair to watch a bit of television, it is usually about 10:45. Most nights, that is about the time I hit the sack. But I’m too wired when I get off work to head straight to bed. It has always been that way, for more than 40 years of working nights on occasion — shooting football games, covering an election, or a late-night school board meeting. When I get home, it takes a couple of hours to unwind.

The pets have noticed this minor change in schedule. Rosie and Sam, our two rescue dogs, raise their heads off the couch and wait for me to summon them to go outside. All I have to say is, “Want to go outside?” and they bolt upright and dash for the door. I put Sam on a leash because he is wont to find an escape hatch — a slight gap in the chicken wire under the deck or a loose fence board. Rosie can be trusted to come right back as long as all the gates and doors to the free world are closed. At the same time the dogs go out, both cats, Tater and Tot, come inside from their final foray outdoors. Both are housebroken and do their business outside.

About a month ago, when we returned from a magical week in Taos, New Mexico, Tot had gone missing. He is the gentler, shyer of the two, prone to hiding while outside. Tot has a short time limit for allowing a human to pet him — about 5 seconds. He often stays hidden when we go out of town, but this time he was nowhere to be found. We all spent lots of time standing outside calling him: “Tot Tot! Kitty!”

I posted his disappearance on Facebook in hopes he had holed up at a neighbor’s house. Tot is so shy that seemed unlikely. We worried he was injured and couldn’t get back to us. I was beginning to give up hope after three days. Tater, the big brother, weighs twice as much as Tot. His belly nearly touches the floor when he walks. He didn’t seem terribly concerned that the little brother had gone missing. Sam and Rosie kept looking for their buddy, however.

Then on the evening of the fourth day, my Beautiful Mystery Companion, aka the Cat Whisperer, went out on the front porch. Tot, looking rather bedraggled, was outside. As he walked inside, Tater largely ignored him, but the dogs came over to say hello. Tot had a bite on his back but nothing serious. He is fine now and sticking pretty close to home. His return was an answered prayer.

So on this night, as I stream another episode of the latest show I’m binge watching and settle in with a glass of wine, all four critters join me in the living room. Rosie clambers into the chair beside me. Sam watches from the couch, his head resting between his paws as if he were posing for a cute dog photo. Tater, aka Blubba Nugget, is curled up on the ottoman at my feet, his rear end hanging off the edge. Tot is curled up on the window seat, keeping his distance as always but at least in the same room. It is quiet and dark, just the flickering glow of the television illuminating the room. All is well.