ASHEVILLE, NORTH CAROLINA – My Beautiful Mystery Companion and I took off last week and chased autumn, which has been slow to arrive in East Texas. We drove nearly 14 hours over two days to hike and drive through the stunning fall foliage that can be found this time of year along the Blue Ridge Parkway. It was worth every mile and minute of the journey, which took us through Arkansas to bisect Tennessee – entering at Memphis and heading into North Carolina after exiting Knoxville, nearly 400 miles later.

The Blue Ridge Parkway stretches 469 miles through the Blue Ridge Mountains from Virginia through North Carolina. Construction began during the Great Depression under the Roosevelt adm

inistration. This massive project provided jobs in the region of Southern Appalachia, but it also displaced residents and placed limits on how they could use their land. In addition, the Eastern Band of Cherokee Indians were “persuaded” to sell some of their land to provide the right-of-way after a five-year battle in Congress to obtain a fair price and a new highway through the Soco Valley.

It took more than three decades to build most of the parkway, and another 21 years for the last section to open, around Grandfather Mountain, in 1987. Land on either side of the two-lane road is maintained by the National Park System. The country’s longest “linear park” is invariably the most visited property maintained by the park service. The two-lane highway has a 45-mph speed limit for its entire length. It would take nearly 11 hours to travel the whole route, not counting bathroom breaks.

We drove about 75 miles of the parkway over two days and hiked each day. The winding road included a dozen or so tunnels bored through the spine of the Blue Ridge Mountains. I tried to imagine the massive effort it took to dynamite and create those tunnels — more than two dozen in total — framed with beautiful stone facades and surrounded b

The first day on the parkway brought soggy weather. At first the rain was gentle and rather soothing. But as we trudged to the top of Craggy Pinnacle, at 5,892 feet, the rain came down harder. Craggy Pinnacle under clear skies boasts some of the best views along the parkway, according to what we read earlier. By the time we reached the top, it was raining sideways with a fierce wind. Fog completely blanketed the vista from all angles. At least we had the peak to ourselves, but we didn’t stay long and headed to downtown Asheville. The rain on this Saturday afternoon did little to deter hordes of shoppers in one of the most vibrant downtowns we have ever visited. I counted four independent bookstores, about a dozen coffee shops and dozens of eateries and retail shops. We jostled through crowds of folks, laden with shopping bags and hoisting umbrellas as the rain refused to slacken. 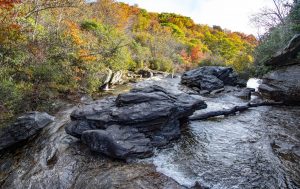 The next day brought clear skies as we traveled an hour south on the parkway to Graveyard Fields, which promised a moderate hike rewarded with a pair of waterfalls. We left early Sunday morning, after a park ranger the day before warned of the crowds all seeking to enjoy the foliage as well. The trek was muddy after the rain, and fog blew in and out of the ridge, providing nice light for photos, at times enveloping the mountains in a shroud that would rise and lower like a veil on a bride.

We were wise to get there early. By the time we finished, the parking lot was full and vehicles lined the shoulders of the highway. On the way home, we stopped at nearly every scenic overlook, looking for more photo opportunities. When the fog lifted, it was obvious where this southern part of the Appalachian Mountains got its name, the distant peaks cloaked in a purplish-blue, while the trees at lower altitudes were awash in color.

It was worth the drive.