Bringing The Apology Table Back to Life

Nearly three months after a fierce straight-line windstorm swept through North Longview, damaging hundreds of homes – including ours – repair work continues. We were luckier than many. Our roof sustained minor damage, plus some smashed gutters. The biggest project has been having our deck rebuilt, and that is nearly completed.

One victim of the storm was the Apology Table. It is a 30-inch square cedar outdoor table. The top consists of diagonal slats with gaps between each board to allow rain to fall through. The table gets its name because I built it as an apology gift for my Beautiful Mystery Companion in 2008. We were a couple but a few years from marriage. Without going into the particulars, I behaved badly. It required some serious groveling to get back into my BMC’s good graces. A small piece of the penance was building this table as a peace offering. She kept the table on her back patio until we joined households. It has sat on our deck since. Each year I re-stain the table at the same time I stain the deck. The deck had to be recoated each spring to keep the wood 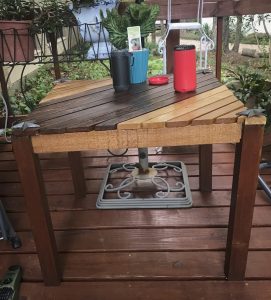 from rotting, because it was well past its useful age.

Luckily, I hadn’t quite gotten around to the annual deck staining – a full weekend of work – before the storm knocked down trees and smashed a chunk of the deck. Now, with a new deck freshly stained, my maintenance is greatly reduced. As has my wallet.

A tree branch smashed the Apology Table on May 8, during the storm. Several of the slats were broken, along with one of the underlying supports. The insurance adjustor gave us $210 for the table, marking it a total loss. But I had no intention of scrapping the Apology Table. As Raul and his family started tearing down our massive deck and replacing it with one considerably smaller and more manageable, I carefully took apart the Apology Table, slat by slat. The bottom of the legs had begun to rot after 11 years out in the elements, so I cut a half-inch off each leg to rid the rot. I pried apart the mortise-and-tenon joints and sanded all the pieces. Slowly I began gluing the table back together.

Something didn’t look right. The slats, which get shorter as they go toward the corners, weren’t lining up correctly, no matter how many times I dry-fit the pieces in different configurations. I ended up cutting some new slats out of cedar. At my BMC’s suggestion, instead of staining everything, I left the new cedar its natural color, so the Apology Table is now two-toned – brick red and cedar tan. The corners still didn’t fit quite right, and I couldn’t figure out why. I shrugged and put four coats of varnish on the table. Then I used a trick learned years ago and bought four metal Texas stars about 4-inches in diameter, which have nails on the back side, and pounded them into the corners to “hide” the fact the slats don’t line up perfectly on the corners.

The table returned to the deck and looks pretty nice, if I may say so. It certainly comes in handy for holding our mosquito killers, wireless speaker, beverages and books. I could have just trashed the Apology Table and bought something, but that didn’t seem right. I like the fact it’s risen from the wreckage.

A few weeks after finishing I found a thin, long piece of weathered cedar outside just off the deck. It took a second, but I figured out where it came from. It once served as the center slat of the Apology Table, which is why the pieces no longer fit correctly, despite my best efforts. I put the slat in the yard waste container. I wasn’t about to take that table apart again.