AUSTIN — I have been waiting for this occasion for several months. One day in the spring, I was walking the Lady Bird Lake trail, on the part bordering Caesar Chavez Street across from the old Seaholm power plant, which has been reconstituted into restaurants and retail. It is now surrounded by high-rise condos. Across the street from the old building that once housed part of the plant — which retained its cool art deco signage: City of Austin Power Plant — a new contemporary building was going up. At the corner, though the building was not complete, was a sign consisting of seven metal letters attached to a wall: LIBRARY. This was slated to be the new central library, what one writer has called the most significant public building erected in Austin in decades. It opened in October.

The six-story complex overlooks both Lady Bird Lake and Shoal Creek. Last week, as a cold front brought gray skies, a stiff breeze and, later that evening, an unexpected snowstorm, I ventured downtown after attending a board meeting. The library has been open about six weeks, and it was time to pay a visit. I sli 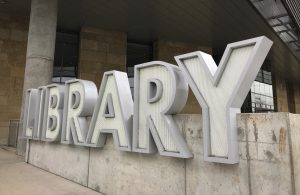 [1]pped into the parking garage below and easily found a parking spot on the first level, that in itself a minor miracle in downtown Austin. I climbed a few flights of stairs and entered.

Whoa. Despite the gray skies, light filled the entire building, which is open and airy, what another writer called the most light-filled library in America. Catwalks crisscross the interior. The mayor called it “Austin’s cathedral,” and indeed it has that feel. It is a place for all people to gather, to explore, create and learn. I wandered through most of the floors. A goodly number of obviously homeless people, their stuffed backpacks beside them, read. A few napped. Students were peering at computer screens, possibly trying to finish end-of-semester projects. Old men read newspapers and magazines, while moms and their children gathered in the creative commons. The place was bustling on a Thursday afternoon.

My middle daughter, Meredith, had visited a few weeks earlier and had found in the stacks a copy of A Hanging in Nacogdoches, which I wrote for University of Texas Press a decade ago. So, of course, I had to find it myself. It turned out the library also carries my first collection of columns — Behind and Beyond the Pine Curtain. Finding a book one wrote on a library shelf is irresistible for a writer, especially a minor one like myself. I could not tell how often this copy of A Hanging in Nacogdoches had been checked out. That is all done electronically now, but I was happy to note the volume appeared a bit dog-eared.

As I have noted many times before, I spend a lot of time in libraries. I am writing this piece while ensconced in the Margaret Estes Library on the campus of LeTourneau University here in Longview. It is my hiding place when the housekeeper arrives for the biweekly cleaning of our home. Some of my fondest experiences come from visiting renowned libraries — the Library of Congress and the National Archives in Washington, D.C.; Boston Public Library, the oldest in the country; the American Antiquarian Society in Worcester, Mass.; and the LBJ Library and Archives and Briscoe Center for American History on the UT campus, to name a few.

The new Austin library is the crown jewel for this city, a superb addition to downtown. Library Director Brenda Branch was quoted two years ago in the Austin Chronicle, saying, “We are trying to create an iconic landmark that is a tribute to the love of knowledge that this community has … a building that they can be proud of, and that they can feel at home in.”

Its creators have certainly succeeded. A-Town, you should be proud.