Another Walk in the Woods

After spending hours transcribing 1840-era newspaper articles, it was time to quit typing and take a walk in the woods. A cold front had pushed through the previous evening, with a scattering of rain — a rare commodity these days. It was windy and clear, cool enough to walk comfortably wearing a sweatshirt, jeans and boots. I learned early on that wearing boots while walking our woods is safer and more comfortable than sneakers.

The wind was stripping the oaks and sweetgums of the scattering of leaves that had clung to their branches. The little cedar saplings — nature’s Christmas trees — bent in the wind, which soon had both my nose and eyes streaming. Above, a murder of crows circled me, cawing loudly to announce my presence. Crows are remarkably clever birds. Since we had much of the trash trees mulched a few months ago, as well as the perimeter of our acreage cleared, the number of crows hanging around our property has vastly increased. I have no idea why.

Glade Creek is up some from its summer low. In September, my brother Gregg, brother-in-law Jim and I managed to cross over, hopping from one sand bar to another and scrambling up its steep bank to explore our prop 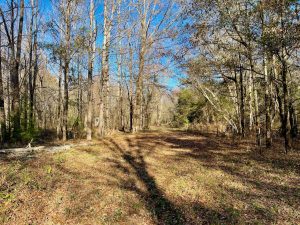 erty on the other side. We found the t-posts marking the eastern boundary of our land. Years ago, the oil company (I think) had built a pipe bridge over the creek, that has long collapsed and isn’t repairable. Someday, I plan to contract with the fellow whose company mulched the trees to have an 18-wheeler flatbed trailer placed across the creek for a bridge. There are a lot of somedays on the agenda for this land.

The afternoon before this walk, my Beautiful Mystery Companion and I were both outside reading. I was out front, and she was out back. Suddenly, this cacophony of howling began. Coyotes were raising a ruckus somewhere in these woods, a spooky sound in daylight. One reason I was taking this walk was to see if I could figure out why the coyotes were howling in broad daylight, which is unusual. As expected, I couldn’t find any evidence.

There was plenty of evidence that hogs remain a nuisance, having churned up part of what was recently cleared. I am probably going to hire someone to come in and clean out this current pack, since I have neither the intention nor the shooting skills to handle the job myself. Plus, I don’t want to stay up all night. Thankfully, hogs are staying out of the front pasture since I shot one and put up a set of strobe lights that are solar powered and blink all night. I can’t prove that’s why the hogs aren’t tearing up the front but am not arguing with success.

While walking, I recorded a video for daughter Mere and son-in-law Matt, who recently moved to Cologne, Germany for a least a year. Matt, an engineer, is leading a work project there. At her suggestion, I use the Marco Polo app through which we exchange videos that can be watched anytime. Talking live is possible through What’s App, but with a seven-hour time difference that can be tricky. We plan to go visit them next year.

These woods are dotted with the detritus of old oil wells, long plugged, though one aged iron horse has recently been put back in service. Throughout the woods, connected by manmade roads probably from the 1930s (telltale by the high ridges between rig sites), I find four concrete pads with large iron rings on top. The rings held the derricks down. I spy long-disconnected power poles disguised among the trees, glass insulators hanging off the rotted cross at top. At the base of one pad, someone long ago built a small metal building with a single window and a doorframe, about 10-feet square. I approach it cautiously, ever mindful of snakes and other critters. For now, it is empty. I guess it was someone’s office at some point. There is no other reason for it to be out here so far into the woods.

These woods hold many mysteries I’m slowly uncovering, both manmade and natural.