A Pleasant Walk in the Woods

The fog rolled in not long after sunrise, enveloping the trees, floating lightly above the front pasture. The air was cool, though not for long. Soon the sun would burn off the fog, and summer lingers in the afternoon. It feels like autumn in the mornings, temperatures close but not quite to sweater weather when I first step outside. It’s coming, though. This year, for the first time I can recall, it actually felt like autumn on the first official day, at least that morning.

I was outside on this early morning because a convoy of trucks and tractors had pulled in behind our house, parking on the graveled lot on which two gas wells are situated. Like many landowners in Northeast Texas, we share our property with oil and gas wells whose mineral rights are owned by someone else, not us. I’m working with the folks who maintain the well to try to camouflage them in some manner, since they’re rather unsightly. I might feel differently if we were receiving the royalties.The crew came to mow along the pipeline that runs through our 57 acres. We exchanged small talk about the depredation the hogs were inflicting on our front pasture, how hogs love the bottomlands created by the two creeks on our land. I told them I was fine with sharing the land with hogs as long as they stayed on the far side of Glade Creek. Good luck with that, one said. I told them to mow back in the woods to their heart’s content. The more they mow, the less left for me. 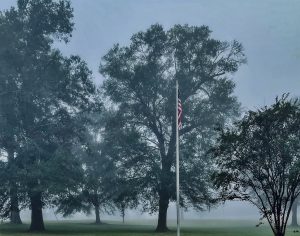 The Sunday afternoon before, I fired up the tractor and tackled a piece of the property that hasn’t been mowed in a few years. Mature hardwood trees provide shade and cover for wildlife, but the undergrowth had gotten out of hand. It doesn’t take long for that to happen here, with (until lately) abundant rain and sun. I knocked down skinny willow trees and noxious ragweed with the bucket on the tractor and then mowed them over with the bushhog. I felt a bit guilty when I mowed Sunday, chopping up literally thousands of wild marigolds. I saved a patch near the gate’s entrance to keep a splash of color. After about three hours, I had cleared the piece to the fence line, which needs repair in places. I will never run out of things to do out here.

After the pipeline mowers left, when I came home from teaching my photography class, I donned my snake-proof Red Wing boots and headed out in T-shirt and shorts to check out their mowing. It’s not the most fashionable look, but it was hot and humid. The crew began mowing right past where I had stopped on Sunday and cleared a 15-foot swath along the fence line, which parallels the pipeline all the way to a locked gate. I climbed over the gate, which I had never seen before, and kept walking until I came to a small pasture with two gas wells. I could see an unfamiliar terrazzo roof through the trees and realized I likely was no longer on our property. It was time to beat a hasty retreat before someone called the law on me.

As I walked back along Glade Creek, I spied a washed-out pipe bridge, some disconnected power poles, a tin shed with broken windows, the detritus of previous owners. The creek spilled its banks in late spring, before we bought the place, leaving a layer of sand and knocking down some fence. Now, after more than two months of little rain, the creek is a mere trickle at the bottom of its 15-foot banks.

My Beautiful Mystery Companion and I returned to the woods the next morning, before work. We found a small pond that has possibilities of becoming a larger pond. A startled blue heron rose from the pond and headed into the trees. Until the leaves fall, we can’t really tell if the pond is close enough to the house to serve our purposes, which is to water future critters and be stocked with fish.

But I took the blue heron as a good omen. All in all, it was a pleasant walk in the woods.