It is time to review what books I read in 2021. This is the third year I have used Goodreads, a social media app, to keep track of spines I cracked during the year. Before, I would diligently write down the titles and authors in a notebook. My daughter Mere suggested Goodreads, which is free and easy to use. Users can become “friends” with others, see what they’re reading, join discussion groups and write reviews.

I do none of that, confining my use to keeping track of what I read. So here we go. 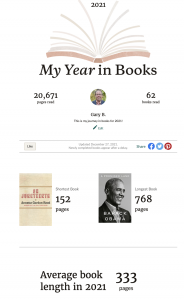 [1]Goodreads announced at year end, I had completed 62 books for a total of 20,671 pages. The previous year, I read 56 books and about the same number of pages. I guess I read some longer books in 2020. The longest book I read last year, weighing in at 768 pages, was A Promised Land, by former President Barack Obama, the first installment of his memoirs. Obama is an exceptional writer, self-deprecating and funny, able to cast a reflective eye on his presidency. Very few politicians can do that, or even try.

The shortest was On Juneteenth, by historian Annette Gordon-Reed, at 152 pages. Reed is a Harvard professor and historian, who grew up in Livingston, Texas, in what is known as Deep East Texas. She won a Pulitzer in 2009 for her work on the Hemings family of Monticello. Sally Hemings, an enslaved Black woman, bore six of Thomas Jefferson’s children. On Juneteenth examines Reed’s personal experiences with racial justice as well as that of her native state.

Other memorable books from 2021: