Cheers to Beantown And Clam Chowder

You wanna go where everybody knows your name. 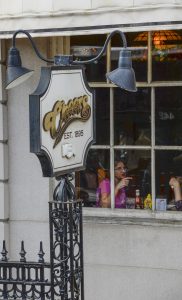 Back Bay, Boston – Nobody knows our name here on Beacon Street, as we hop off the Old Town Trolley, just up from Boston Common. John Kerry, the former senator and presidential nominee, and his wife, Teresa Heinz, live nearby in one of the brownstones that grace the narrow streets of Beacon Hill. I once tried to figure out which one was their home, to no avail. It is unlikely they would have answered the door even if I had figured it out.

My Beautiful Mystery Companion and I are back in Beantown, this time with an old friend, Glenn McCutchen, whose son is getting married in Vermont in a few days. (More on that in an upcoming episode.) Taking the hop-off, hop-on trolley is the best way to introduce this vibrant city to a newcomer. We disembark several times – once to stroll through the Boston Public Library, the first large free lending library in the United States. A French ventriloquist named M. Nicholas Marie Alexandre Vattemare in 1839 proposed an exchange of books and prints between French and American libraries, probably not realizing the rarity of such institutions outside of colleges in a young America. Why this was of interest to a ventriloquist seems to have been lost to history.

It took 15 years before an actual public library was founded, and it soon proved too small. The present central library in Copley Square was completed in 1895. It is massive and beautiful, with a stunning lobby built of yellow marble and graced by statues of two large lions. The lions were dedicated to two Massachusetts regiments that fought in the Civil War. I rarely tire of pointing out to my companions, both born below the Mason-Dixon line, that the statues in Boston Public Garden memorialize the victors of that horrible war. My Yankee roots are showing.

At 84 Beacon St., we descend into a pub located in the basement of one of those brownstones. It is the home of the Bull & Finch Pub, which became the inspiration for Cheers, the beloved television sitcom starring Ted Dansen, Shelley Long, Kelsey Grammar and a host of other characters. The familiar Cheers sign seen on the television show beckons passersby — though inside, the bar still goes by its original name. (A replica of the Cheers set seen on television is inside the historic Faneuil Hall, built in 1826. Originally a marketplace to sell meat, poultry, eggs and butter. It is now the Faneuil Hall Marketplace, with lots of vendors. Jugglers practice their craft outside.)

The place is packed as always. Cheers merchandise abounds, and the cashier is doing a brisk business. We all order yet another cup of clam chowder – a dietary staple when in New England – and a Sam Adams Summer Ale.

After lunch, we waddle down the street a few blocks to the Gibson House Museum, having spotted a small sign the day before. It is a rowhouse built in 1860 and occupied by three generations of the Gibson family. The interior is furnished almost exactly as it was when the family lived there, down to the gilded wallpaper and coal-soot stained ceilings. The home is only 25 feet wide but 90 feet deep, and it spans four floors. The servants lived on the top floor, with the exception of the fellow who tended to the furnace in the basement.

Our young tour guide is a bit too brash for our tastes, but that is probably more a reflection of us than him. It is likely a generational thing. After the tour, it is unanimously decided that a nap is in store, to get us prepared for our next meal, in North End – Boston’s Italian district. We trudge back to the hotel, cutting through Boston Public Garden.

It simply doesn’t have to get any better than this.